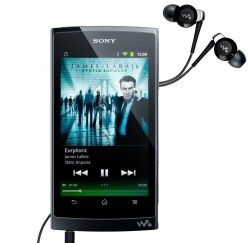 Sony has announced a new flagship MP3 player, the NWZ-Z1000.

Bluetooth and DLNA connectivity are also included so you can stream content wirelessly. You'll also be able to download Apps from the Android marketplace to use on the player.

The UK is getting the 32GB model which will cost £300 when it goes on sale in the UK at the end of February.

Highlights include the XBA-NC85D (£450). These headphones use digital noise cancellation with a rechargeable battery fitted inside the actual housing. One charge (via USB) should be enough for around 20 hours use.