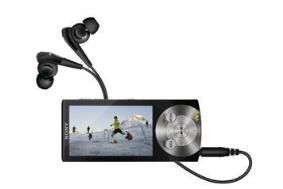 Despite its diminutive dimensions, it's packed with technology: there's a 2.8in OLED screen, 16GB of storage, S-Master digital amplifier, BBC iPlayer and iTunes compatibility and noise-cancelling headphones.

A Scene Scroll function lets you browse quickly through longer videos that are displayed as a series of thumbnails: just select the scene you want and press play.

And if you want to watch your videos on the telly, you can hook up the NWZ-A845 to your TV using the optional AV cable.

The supplied EX in-ear headphones offer three noise reduction settings for use on board a plane, bus/train or in the office.

A wide range of music and video formats are supported, including rights-managed WMA and WMV files.

Battery life is a claimed 29 hours for audio and nine hours for video. A Battery Care function improves overall battery lifespan by limiting charging levels to 90 per cent.

Two more Walkman ranges
In addition to the super-slim NWZ-A845, Sony is simultaneously releasing two more new Walkman models: the 2GB water-resistant NWZ-252, the firm's first 'wire-free' MP3 player designed for active, sporty types – it can even be rinsed under a tap after a run or gym workout, or used in the shower.

And the compact Walkman B Series (available in 2GB and 4GB sizes) is aimed at young bass fiends, with its bass boost button and flashing red 'Power Illuminator' LEDs.

The Sony Walkman NWZ-A845 will be available from Sony Centres and the Sony UK website from April 13th, the NWZ-250 Series goes on sale in late May and the B Series from early June.

We'll publish a First Test of the NWZ-A845 in the June issue of What Hi-Fi? Sound and Vision, on sale May 5th.