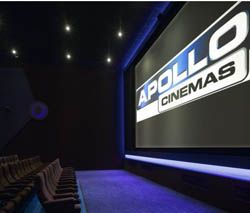 Sony Digital Cinema and Sony Music are working to bring a range of 'music experiences' to cinemas as part of Apollo Cinema's "More" campaign.

The aim is to deliver unique content that takes advantage of the latest cinema technology.

The partnership was kick-started by the European premiere of Avril Lavigne's new album – don't get too excited – which featured a 3D video.