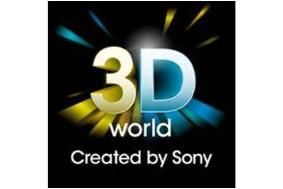 A further PS3 firmware upgrade to make the games consoles 3D Blu-ray disc compatible will be made available later in 2010.

As part of the June launch strategy, Sony Computer Entertainment Europe will release four 3D stereoscopic PS3 "game experiences" through the PlayStation Network, available as a free collection to anyone who buys a Bravia 3D TV.

Sony says its 3D glasses will have an average battery life of around 100 hours and an auto shut-off function. Smaller pink and blue glasses will be available for children.

Finally, 3D Blu-ray players. The Sony BDP-S470 '3D-ready' model is already on sale, and a 3D firmware upgrade to make it fully 3D-compliant will be released in June.

The BDP-S570 Blu-ray player, which is fully 3D capable out of the box, will go on sale in May.

As we've already reported, Sony and FIFA have announced they'll be filming 25 matches from the 2010 World Cup in South Africa in 3D.