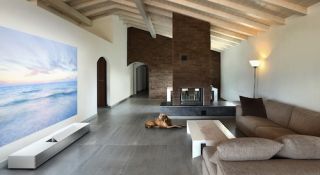 The model number is yet to be confirmed, but the unit's due for launch in the US later in the summer. It's capable of producing a mammoth 147in Ultra HD 4K image from a ridiculously short distance away - 28in to be precise.

Having seen it in the flesh, it's an impressive-looking unit. The projector is flanked by speakers, which in turn are flanked by compartments for your home cinema kit.

The projector's going to cost an estimated $30,000 - $40,000 when it goes on sale in the US later this summer (UK launch tbc). All you need is a white wall or projector screen big enough for that 147in picture. We can't wait to get one in our testrooms...