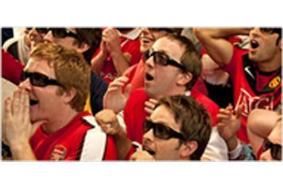 Sky Sports has confirmed it plans to broadcast three major finals this Saturday, May 22nd, amounting to eight hours of 3D sport on TV.

The event kicks off at Wembley at 2pm with the Championship playoff final between Blackpool and Cardiff City.

David Jones will present the coverage from Wembley Stadium, with Daniel Mann and Gary Birtles handling commentary for the 3D feed.

This will be followed at 4.30pm by live coverage from France of the Heineken Cup Final between Biarritz and Toulouse, with commentary from Mark Robson and Ieuan Evans.

And finally at 6pm you'll be able to watch the UEFA Champions League final between Bayern Munich and Inter Milan from the Bernabeu Stadium in Madrid.

"This Saturday's offering is another first from Sky Sports, as our 3D operation embarks on its biggest challenge yet; three major finals including the richest prize in sport, the finale to club rugby's biggest competition and European football's club showcase," says Barney Francis, managing director of Sky Sports.

Anyone wanting to watch the games in 3D can use the online pub finder on Sky's website to find a participating venue in their area.