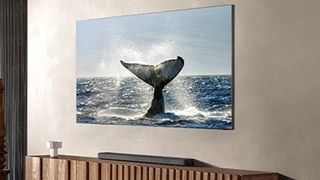 Another day, another TV leak. This time, images appear to show a brand new frameless Samsung 8K QLED TV, predicted to launch at CES 2020 next week. The Samsung 8K TV, images of which have been uncovered by 4K Filme, is reportedely the Q900T or Q950T, Samsung's flagship QLED TV for 2020.

The site claims to have found the images on the Samsung US website, which, much like Sony yesterday, appears to have jumped the gun ahead of next week's news extravaganza at CES. As well as the Sony frameless 8K TV, the images also purportedly show a new Samsung soundbar.

Ultra-thin bezels and 'frameless' claims are nothing new but as always it looks like Samsung might have managed to go a millimetre or two further this year, all but removing any frame around the screen. Samsung's tag line, "Experience the power of a future across all borders", seems to allude this.

No visible cable seems to suggest Samsung will stick to the One Connect Box concept, which means all your cables go to this box rather than to your TV - an idea that we're big fans of.