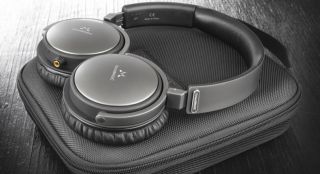 SoundMagic has developed a strong reputation for producing entry-level headphones - its E10S in-ears won the under £50 category in this year’s What Hi-Fi? Awards, and their predecessors have all added weight to the company’s groaning trophy shelf.

The firm was established in 2005, and has used the knowledge it’s built up over that ten-year history to launch the Vento P55, its first pair of premium portable on-ear headphones.

Developed over two years based on customer feedback, the Vento features a stainless steel headband with aluminium earcups. That keeps their weight down to 285g, but ensures they should be able to withstand the bumps that come with using them on a commute.

The Vento’s 1.2m cable has a universal smartphone control, with an inline mic and three-button remote. Inside is copper winding material imported from Japan in order to produce 20mW of power, boosted by 40mm Neodymium Dynamic drivers that have been developed in-house.

The Vento P55 on-ear headphones are available now to pre-order.