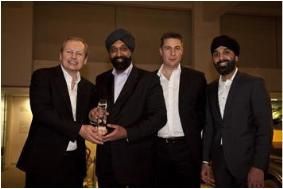 The PRC Samsung zone in Ilford, Essex is one of the UK's largest Samsung-branded outlets. The re-launch of the flagship outlet in July 2009 was just one example of PRC's success in a tough market, according to Samsung.

"The opening of the PRC Samsung zone in Ilford, which even included Bollywood superstar Shilpa Shetty, was a phenomenal success story in 2009, making PRC worthy winners of the Samsung Dealer of the Year Award," says Colin Rodgers.