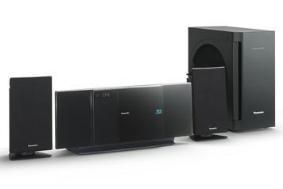 There are four new Blu-ray home cinema in a box systems on the way, starting with the flagship SC-ZT1 wireless 2.1 system, which requires no cables to connect the speakers to the main unit.

As standard it's a 2.1 system with two slimline pole speakers, designed to complement any flatscreen TV, although an additional pair of wireless speakers can be added for the rear channels to make up a full 5.1 system.

Each speaker contains four 24mm tweeters, with a 12cm subwoofer built into the speaker's base. Uncompressed audio is sent from the main unit to the speakers wirelessly using the 2.4Ghz frequency band, up to a distance of 15 metres.

High-definition virtual surround
Although the SC-ZT1 is supplied as a 2.1 system as standard, it can still decode Dolby TrueHD and DTS-HD as 'virtual surround sound' when combined with its partnering DMP-BD80 Blu-ray player.

Images from the Blu-ray player can also be sent wirelessly to a compatible TV such as the new Panasonic TX-P54Z1 plasma.

The three other BD systems in the range are more conventional wired designs. The Panasonic SC-BTX70 (pictured) has a slimline, vertical main unit containing a Blu-ray player and amplification, plus an integral iPod dock.

It too is a 2.1 system, equipped with Viera cast internet connectivity, BD-Live compatibility, SD memory card slot and USB terminal for connecting other digital devices.

Profile 2.0, BD-Live compatible
Onboard audio decoding of Dolby TrueHD and DTS-HD is included, and users can add an extra pair of rear speakers for full 5.1 surround sound. A 96-kHz surround re-mastering feature is designed to enhance the playback quality of CDs and other stereo sources.

For those who want a full suite of five speakers and a subwoofer from the off, there are two 5.1 Blu-ray systems on offer, the Panasonic SC-BT205 and SC-BT200. The former has tall floorstanding speakers front and rear, the latter much smaller bookshelf ones.