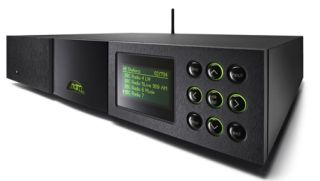 There's an unwritten rule in organising press events: Never let the engineers do the presentation.

Too many times I've sat through endless sets of PowerPoint slides as the R&D people are allowed out from their development bunkers, blinking in the limelight of a presentation room and keen to show everyone what they've been doing for the past however many months.

These guys' work is all about detail, and so it's detail they want to share with you: on one memorable occasion I swear the assembled throng got taken component by component through a highly complex AV receiver.

It got to the point where one journalist came out of the endless presentation and into the 'workshop' phase of the day muttering 'What next? Are they going to give us a bag of bits and get us to build the… thing?'.

Brave, then, of Naim to go against the grain and let the engineers off the leash – well, almost – at the first showing of its new NDS high-end player, held at its Salisbury HQ on Monday.

A smattering of journalists from around Europe were in attendance, with one or two notable by their absence – playing the 'I'll only come if you guarantee me an exclusive' card apparently cuts little ice with Naim – and we gathered in the company's boardroom after lunch in the works canteen for early arrivals, and factory tours for those paying their first visit to the company.

I managed to fit neither of those categories.

Naim had got it right when it comes to 'letting the engineers do their thing' for what is clearly a highly engineering-led product: after an introduction from company boss Paul Stephenson and an overview of the streaming market as Naim sees it from marketing manager Alison Esposti, the R&D team took centre stage, each explaining their own contribution to the project.

I wouldn't say it was 'keep it simple, stupid' – we went into rather more detail than that! – but by focusing on different aspects of the design and development story in bite-sized chunks we rapidly built up an idea of just what goes into a product such as this.

But first, that market overview, Esposti (above) explaining that Naim has been asking owners of its network products about their buying patterns, and getting an idea of where they're going.

35% of those customers have bought at least five products from Naim, 14% have been buying Naim equipment for more than 20 years, and while 8% of them have come straight into the brand with a streaming product, 43% of buyers of the NDX or ND5XS have been with Naim for five years or more.

The slow stream in China

There are geographical trends, too – China, for example has been slow to adopt streaming, but Europe much faster – while very few users report making much use of cloud-based content, and most are still more interested in 'bridging' products such as the original NaimUniti.

However, Naim's own record label sees 80% of its downloads are in high-resolution, and less than 5% at MP3 quality, with customers saying high-resolution is most important to them.

Naim's Gary Crocker explained the brief behind the NDS, as you can see from the slogan behind him, and the concept of the ugradable power supplies with the aid of the chart below, showing the various levels of regulation both in the power supply unit and the NDS itself.

That's how an NDS is powered with a single 555PS, using twin Burndy cables: you can, of course, start with just an XP5 XS or XPS.

Click here for a larger view of those power supply options – and here for as big a shot of the rear of the NDS as I can post for the socket-spotters!

Whichever power supply you choose, multiple stages of regulation are used to isolate the player from any noise, and indeed keep separate sections of it very separate!

Then it was time for serious thinking caps to go on, as Naim's electronics design manager Steve Sells (right) stepped up to the plate to explain the use of DSP in the new player.

The NDS runs a 40-bit floating point SHARC DSP unit capable of 1000m calculations a second – or, as Sells put it, 'If you gave every single person in China a calculator, the SHARC would still be faster!' – and this combines the functions of S/PDIF receiver, jitter reduction and digital filtering.

As on previous Naim players, the NDS removes jitter by taking in the digital signal, buffering it and reclocking it out correctly to the digital to analogue conversion section.

The system clocks in data to a RAM buffer at its inconsistently timed rate, adjusting the master clock frequency to best suit the rate of the incoming data.

The SHARC DSP monitors the rate at which data is coming in and going out and adjusts the master clock frequency gradually to avoid overflow or underflow, clocking the data out to the DACs. Once the system has determined the correct frequency, it will only change it every 10-15 minutes.

On the rare occasions when none of the master clock's 512 steps is close enough to the incoming sample rate, the NDS reverts to Plan B: it uses an asynchronous sample rate converter able to accept any sample rate from 32kHz -10% to 192kHz +10%.

Unlike past models, it does all this using the internal memory of the SHARC device, rather than relying on additional buffering, enabling it to more closely monitor data-flow.

The SHARC processor also implements the 16x oversampling filter, which is of the same design as that used in the Naim DAC. To keep power supply noise down – given that the DSP draws less current when it isn't doing its sums – the filter is implemented using just five lines of assembly code.

As in the DAC and NDX, the filter uses a 40-bit processor rather the the more normal 32-bit, giving the precision required for 24-bit audio.

The conversion itself is the familiar PCM1704 used in the CD555 CD player, a true multibit design using one converter for the positive side of the signal, and another for the negative, its sign-magnitude architecture 'combining the low noise of a conventional ladder DAC with the superior low-level performance (but poorer noise) of a delta-sigma DAC.'

In addition, a six-layer construction is used for the digital board, shortening signal paths as well as keeping delicate signals well inside the board, further protecting them.

Technical director Roy George (left) steps in to explain the way the DACs work, giving current output rather than voltage: this needs to be converted into voltage changes to feed the analogue filtering and output stage.

Rather than the off-the-shelf op-amps used for this in the NDX, the NDS has a custom-designed I2V converter, giving far higher bandwidth than any op-amp the company could find.

George has been described as the one person most responsible for the way the company's products sound, and he describes Naim design as 'a mixture of revolution and evolution.

'Digital design is more about revolution, while the analogue design of of the NDS is more an evolution of the knowlege we gained in building the 555 series products.'

Part of that is the mounting of the main audio boards on hefty decoupling weights, which 'float' on four custom-made steel springs.

The mounting of these springs was determined by 3D CAD modelling to determine their precise location relative to the centre of gravity of the board/subhassis assembly, ensuring the whole assembly only moves in the vertical plane in response to outside vibration.

You can see one of these subchassis plates under the analogue board in the shot above (which also, by the way, shows the Burndy link-plug used when 'only' one power supply is connected). :

Each plate weighs 3kg and is made from brass – the engineers tried aluminium, but it didn't sound as good – , with its mass and the rate of the springs combining to give a mechanical resonance frequency of 4Hz.

In other words, well out of the audio band.

Above this. the assembly's suspension provides increasingly effective isolation as the frequency of the incoming vibration increases.

The circuitboards are mounted on the weights using eight posts, and even the effect of the dressing of the internal cabling was considered to avoid it providing any path through which vibration might sneak into the circuitry.

The can can still change

Talking of isolation, a large metal shield covers the streaming board and firmware-updatable ARM-powered control board – both potential sources of noise. At the moment this 'can' is tin-plated copper, but work is still going on with different materials, and investigations are being carried out into the use of Sorbothane for isolation.

This is, after all, a Naim product – and there are, after all, three months to go before it's launched!

Now sourced from Switzerland, as there isn't an extrusion mill in the UK able to handle it, the sleeve performs multiple functions: it disperses heat, adds mass for vibration-proofing and acts as a shield agains radio-frequency interference.

It's a classic bit of Naim's 'if it ain't broke' thinking that this design is still used many years after it was first developed, and still does the job just as well.

Last up is technical project manager Trevor Wilson, to talk about the streaming technology at the heart of the NDS. He explains that, while Naim has built its streaming players on the BridgeCo platform since it was chosen for the original NaimUniti, the company has done a lot of its own development work on the platform.

The latest streaming solution, used in the NDS, is very much designed in-house: the software has been designed to make the streamer sound better, not least by reducing the amount of code and thus the loading on the processor

While the company is also aware of the need for greater control and functionality – when the player is used with an iPod input, for example – , it sticks to the mantra that this should never affect the sound.

...And yes, playlists are coming

But there's more to come on the control front: a Crestron/AMX version of the control app is on the way, allowing better integration of the Naim players into custom-install systems, and in the nearish future there will be the ability to use an iOS device to create and store playlists, plus a more information-rich browsing experience.

This will take extra data direct from a home network's UPnP server to the control device, rather than having to go via the Naim player as is now the case.

How far down the line is that? Wilson says not so far: 'It's in beta now – I'm already using it at home, and it should be launching in June.'

'End to end' control is the Naim mantra, from ripping and storing, via control, to playback; in his introduction to the whole session, Paul Stephenson had admitted that, for several reasons, Naim was a latecomer to CD when that format was taking off, and followed others' lead.

It faced a similar problem when hard-disk music systems were first considered, he says: 'It was an audiophile nightmare – switch-mode power supplies, high-speed networks and an electrically noisy environment.

'We made an early decision to get into the whole chain: storage, control and networking.'

With that thinking, the obvious strength of the team behind the current project, and the enthusiasm of its buyers for such products – not to mention the contribution they're making to the company's turnover – , it seems likely the NDS is far from Naim's last word on the streaming subject.