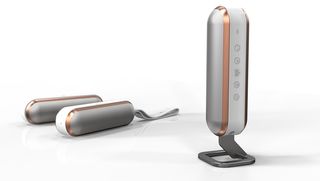 The products were developed in collaboration with the Bullitt Group, which struck a deal with Ministry of Sound last December, and have been tuned by the team of sound engineers and in-house DJs behind 'The Box', the Ministry's main room sound system.

The acoustic team was led by artist and producer Phil Faversham and was tasked with "ensuring the new products exude Ministry's famous sound reproduction prowess... combining its twin passions for great music and incredible sound".

There are five wireless speakers in the range and four pairs of headphones. As well as reflecting the club's sound quality, the wireless speakers are also designed to enable one-touch streaming of the live club feed every Friday and Saturday night.

All the wireless speakers include Apple AirPlay and DLNA capability, and support multi-room playback and streaming. A new app allows users to browse and play music from any device, and stream different songs in each room as well as access exclusive content.

Details of the products are outlined below.

A £130 Bluetooth speaker with a splash-proof design, NFC (Near Field Communication) pairing, a micro USB charging port and the ability to connect two speakers to make a stereo pair.

There's also a cheaper version, the £80 Audio S, which is available in black, white, red or blue.

This £150 Bluetooth aptX speaker has a range of up to 10 metres, NFC pairing, an internal rechargeable Lithium-ion battery, a claimed four-hours playback and a 'tap and swipe' touch interface to change volume and skip tracks.

Like the Audio S Plus, two Audio Ms can be paired to create a stereo pair and there's a micro USB charging port.

Audio M Plus (wi-fi and multiroom)

This looks the same as the one above but is the wi-fi/multiroom model and costs £200. It connects to any home wi-fi network and will play music from a smartphone, tablet, PC or networked device.

The biggest and most expensive speaker in the range, the Audio L Plus costs £300 and, like the Audio M Plus, has wi-fi/multiroom capability as well as aptX Bluetooth/DLNA/AirPlay connectivity and Spotify Connect.

Both the M and L Plus have one-button access to music streamed directly from the Ministry of Sound nightclub. While the M Plus has a rechargeable Lithium-ion battery, the L Plus is mains powered.

The latter model is available in black, white, red and blue.

This is not the first time the Ministry of Sound has entered the audio market. Back in 2011 it released a range of headphones to celebrate its 20th anniversary. In the same year the brand teamed up with Hed Kandi to launch a range of iPhone audio accessories.

And in 2007 we tested the Ministry of Sound MC0571P micro system, giving it a solid four stars.