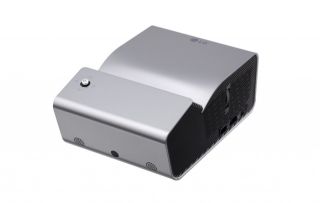 LG has unveiled two new Minibeam projectors, the PH450U and PH150G. The more powerful of the two, the PH450U, is able to project 450 lumens which, according to LG, makes it the brightest battery-powered projector of its kind.

The PH450U is an Ultra Short-Throw model, meaning that it can fill the screen from a relatively close range. It can project an 80in HD image when positioned 33cm from the screen.

It has a bulb life of 30,000 hours (approximately ten years) and a battery life of 2.5 hours, so should last through most blockbuster films, and can be connected via HDMI cable or USB.

The PH150G is a more compact version of the PH450U, measuring 11.5 x 11.5 x 45cm and weighing 450g. Both models come with Triple Wireless, Wi-Fi Screen Share connectivity and Bluetooth compatibility.

The PH450U and PH150G will be available in the UK from next month. The price is yet to be confirmed.