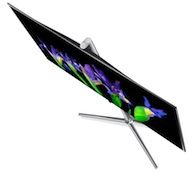 The 55in OLED TV sets shown by LG and Samsung won't be coming to a shop near you anytime soon – that's the view of industry analyst DisplaySearch, which says problems with manufacturing yield are forcing Korea's big two TV manufacturers to delay their launches until late 2013.

The organic light-emitting diode technology, which promises images much sharper than current LCD TVs and displays as thin as just 4mm, has been much touted as the future of TV in the home.

Making smaller OLED panels (above) for smartphones and tablets is relatively well-sorted now, but scaling up panel sizes to suit their use in TVs is proving problematic.

Quoted by The Korea Times, a DisplaySearch source says that 'Samsung and LG planned to start selling OLED TVs at major outlets worldwide during the London Olympics. But mass-produced OLED TVs will be available from late next year, not this year.'

The low figure represents no more than a few sales samples to be shown at exhibitions and in shops, and the low yield is also a factor in the pricing of new products: Samsung was quoting its 55in OLED TV at around KRW10m, or about £5600, while LG's was pitched at about 12% less.

That doesn't compare too well with existing technologies: a 55in LED-lit TV currently costs in the region of £1500-2500, while it's possible to buy even bigger sets for as little as £1000.

The two companies are remaining relatively tight-lipped about the delays, Samsung Electronics CEO Dr Oh-Hyn Kwon (left) saying only that 'We are making progress under our business roadmap. But high prices and lower manufacturing yield are problems'

But both companies are still saying that OLED is 'to be released soon,' while Kwon Hee-won, head of the TV division at LG, still promises that 'We will introduce our OLED TVs ahead of our rivals.'

His counterpart at Samsung refused to comment, but Samsung Display boss Cho Soo-in told the paper more studies would be needed before large-scale production of OLEDs could begin.

As previously reported, sales of OLED TVs are expected to reach up to 2.1m sets worldwide by 2017, but this will still account for less than one per cent of the total TV market.