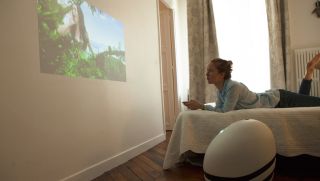 The Paris-based tech manufacturer says the HomePod marks a "complete rethink on computers" and comes with video projection and 360-degree audio among its smorgasbord of functions.

And the HomePod is now destined to come to the market after its crowdfunding campaign on the Kickstarter platform eased past its $100,000 target – eventually attracting more than $260,000.

HomePod is smart and wireless and has also been described as a "modern version of R2D2"; it can move from room to room and transports its technological functions in an 11in x 16in device.

The product will let you project movies onto almost any surface, listen to your music, play games remotely and more, with control available through a smartphone and tablet app (iOS/Android).

In terms of HomePod's specs, it includes six 25W-speakers and a 30W-woofer for audio; a 1000-lumens projector that can support video resolution up to HD 1080p; and 1TB of local storage.

MORE: Read all our projector reviews and news

With the Kickstarter campaign proving a success, it is now expected production will continue into the new year with a developer kit due out in March and the first products shipping in April.

It's thought that pre-ordering will start in May, before a full public release in September. The HomePod is expected to cost a cool $5000 once released – that's just over £3000 in the UK.

Keecker founder and CEO Pierre Lebeau said: "We all love the big screen, but hate being tied to a single space and, while tablets and smartphones are great, they're very personal.

"With Keecker, we've combined the flexibility of tablet content with the richness of a home cinema experience by inventing the first collective computer in the world."