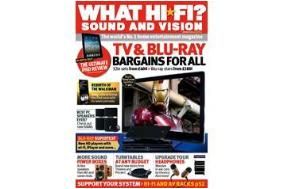 And if it's a new 32in flatscreen TV you're after, check out our Group Test of the latest flatscreen sets from LG, Sharp, Sony and Toshiba.

For those who want surround sound from tiny speakers, we've put a trio of impressive compact style speaker packages through their paces, from Boston Acoustics, Jamo and Teufel.

And our eight-way test of stereo active speakers is bound to get tongues wagging, while portable DAB radios get the once over in our six-way round-up.

We've also rounded up a selection of hi-fi and AV kit racks to find out how they perform.

Hi-fi fans can feast their eyes on a new budget turntable from Pro-ject, plus a pricier model from Thorens, Creek's Audio Evolution stereo amp, a pair of heavyweight Silver RX8 floorstanding speakers from Monitor Audio, standmount speakers from Revolver and Totem, plus a new stereo receiver from Cambridge Audio, the Topaz SR10.

Our Big Question feature this month tackles the dilemma "Can a home cinema amplifier match a stereo amp for music?" Three readers decide.

For those who prefer a more purist approach to their music, our Temptations section takes a long hard look at, and listen to, Rega's flagship Isis CD player, the Synthesis Shine valve amp and Spendor's splendid A9 floorstanding speakers.

And don't forget you can win one of ten Freesat Humax HDR high-definition personal video recorders in our June competition. Just head on over to our competition page to enter.

All this and more is in the June 2010 issue of What Hi-Fi? Sound and Vision, on sale now.