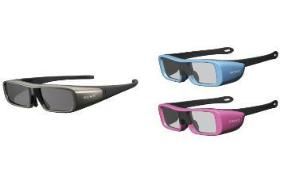 The company will also be launching 52in and 60in models, all with integrated 3D and supplied with two pairs of glasses, while there will be a quartet of '3D-ready sets', to which the transmitter and glasses need to be added.

Sony has upped its targets for LCD TV sales in the next financial year to around 25m units, 67% more than it expects to have sold in the year ending this month. It hopes 10% of those TV sales will be of 3D-capable models, and aims to raise that figure to 40% of 2012-13 sales.

Only the Bravia LX900 series 3D TVs will be sold complete with glasses in Japan; for the other 3D-ready models consumers will have to buy add-on glasses and an infrared emitter to control them.

So, for a conventional nuclear family, we're talking £400 on top of the cost of the TV. Takai, ne?