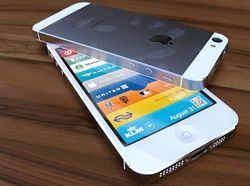 Apple has confirmed a press event for Wednesday September 12th with a none-too-thinly-veiled hint that it will be see the launch of the iPhone 5.

A new iPhone has long been a given for an Autumn launch and Apple has now confirmed the date of an event, albeit not, of course, the details of the product that's set to replace the iPhone 4S.

Rumours of a name change or jump in number look set to be wide of the mark, with the design of the invitation featuring a shadow of the number 5, suggesting that it will be the iPhone 5.

Whether the iPhone 5 will be joined by an iPad mini remains up for debate, while the launch of an Apple TV – a smart television rather than the existing streaming box – is looking increasingly unlikely.

It looks likely that the new iPhone will feature a larger screen, bringing it closer to the hugely popular Samsung Galaxy S3 and HTC One X in size, not to mention the massive Samsung Galaxy Note.

The smart money has for a long time suggested the iPhone 5 will have a 4in screen – so not quite as big as the 4.8in Galaxy S3 – with a slimmer, taller profile and a 1136 x 640 resolution.

A new Apple connection looks on the cards, with Apple changing its 30-pin connector to a mini 8-pin connection. [picture via Techcrunch.]

This will mean it won't be out-of-the-box compatible with existing iPod docks and chargers. That said, it's almost a given that adapters will be available, so don't be scrapping your speaker docks as yet.

Apple's iconic but much-maligned Apple earbuds are well due a redesign and it looks like this year could be the year.

Reports have emerged from Vietnam – previously they were made in China – of earphones with a new shape, smaller profile and more immersive design.

There are of course a whole heap of other rumours on the extra features that could come to the iPhone 5.

NFC wireless transfer capability is available on phones such as the HTC One X, LG Optimus 4X HD and Samsung Galaxy S3, allowing for the possibility of wireless payments and more, and it's on the shortlist of possible specs for the new iPhone.

The existing 8MP camera on the iPhone 4S is good but could well be improved, maybe with an increase in megapixels or perhaps more likely better optics.

The iPhone 5 stage could well be shared by new iPod nanos and new iPod shuffles according to reports on 9to5mac, which states that two or three new or updated devices, in a range of storage sizes and colours, could be revealed on Wednesday.

A new iPod classic looks unlikely but two years since the nano and shuffle were updated, it looks like Apple could update the ranges.

Will the iPhone be 4G?

It looks increasingly likely that the iPhone will follow the lead of the iPad and support 4G networks. However, supporting 4G across multiple territories isn't that easy.

Whether the iPad would work on 4G in the UK was shrouded in confusion and eventually Apple was forced to drop the 4G boast from its advertising in the UK.

Everything Everywhere, now called EE, dropped a strong hint that the iPhone 5 would be compatible with its 4GEE network, the UK's first 4G network.

With the Samsung Galaxy S3 and HTC One X confirmed for 4GEE, it would seem strange for Apple not to get the new iPhone on board. The iPhone 5 on 4GEE looks likely, then.

Lastly, it seems Apple could change the size of its SIM cards, ditching the existing microSIM for something even smaller.

We will be covering the Apple iPhone launch event live next Wednesday September 12th.