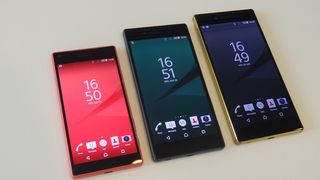 Sony has announced a new flagship range of smartphones, including the world’s first 4K handset.

Announced at IFA 2015 in Berlin, the Sony Xperia Z5 family is made up of the Z5 Premium, the mid-range Z5 Compact and the original flagship (and successor to our 2014 Award winner), the Xperia Z5.

MORE: Hands on with the Sony Xperia Z5 Premium

The Z5 Premium offers the largest screen at 5.5in with a 4K resolution, while the Z5 is 5.2in with a regular Full HD display. The baby of the group, the Z5 Compact, rounds off proceedings with a 4.6in screen at 720p.

You’ll find 64-bit octa-core Snapdragon 810 processors at the heart of all the phones, with 3GB RAM each for the Z5 and Z5 Premium, and 2GB for the Compact, plus 32GB of on-board storage with a microSD card slot for expanding to over 200GB.

Sony has developed a new 23MP camera with F2.0 lens for the range – the company’s first completely reimagined smartphone camera module since the Xperia Z1.

It promises the fastest autofocus in a smartphone of just 0.03 seconds, a clearer 5x zoom and better low-light photos. There’s also a new SteadyShot mode for helping eliminate shaky footage from videos.

The design has seen a slight tweak from the Z3 family, and a return to straighter edges on the sides to accommodate the new fingerprint-sensor power button, mounted on the right-hand side.

The Z5 and Z5 Compact (pictured) feature a new frosted-glass back panel, available in white, black, gold and green, and white, black, yellow and coral respectively. The Premium is available in a mirror finish, in gold, chrome and black.

Of course, we can expect the family to be fully waterproof, support high-resolution music playback and pack a claimed two-day battery life.

The Sony Xperia Z5 and Z5 Compact are due to be launched in October, with the Z5 Premium following in November. Prices are still TBC but we’ll bring them to you as soon as we have them.