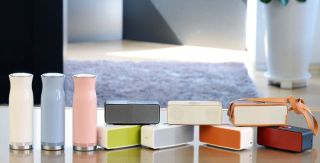 IFA 2015 gets under way early next month with pretty much every brand under the sun set to announce something new at the consumer technology trade show in Berlin.

As is now becoming customary before such shows, some announcements are being released ahead of time to beat the rush: like these new products from LG.

The LG Music Flow wireless range will get a new addition in the shape of the P5 (pictured below), which joins the P7. A rechargeable battery, which promises a 15-hour life, makes it portable.

If you're not sold on Music Flow - and we weren't last time we looked - then you might like the look of the SoundPop 360 (pictured top, left).

Much like the Ultimate Ears Boom, it aims to deliver 360-degree sound without a sweet spot from a cylindrical speaker. The SoundPop 360 promises 20 hours of battery life.

Both products can be connected to multiple Bluetooth sources at once - two phones, say - thanks to what LG calls Multi Point technology. Dual Play conversely allows you to connect one source (phone/tablet/PC) to two wireless speakers. TV Sound Sync will also allow you to connect either of the new LG speakers to a TV.

The two new speakers, and plenty more besides, will be unveiled at IFA, which officially opens on 4th September. You can read about what we expect to see in our IFA preview...