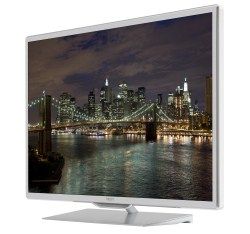 Philips has announced a new flagship 9000 Series LED TV at IFA in Berlin, with an emphasis on Smart TV and stylish slim design.

The 40in and 60in Philips sets deliver active-shutter 3D pictures, which Philips calls 3D Max as opposed to its Easy 3D passive TVs.

There's also 2D-to-3D picture conversion and full-screen 2D gaming for two players using Philips' 3D glasses, allowing two people to each see a different image on the screen at the same time. You get two pairs of active-shutter 3D glasses with both the 46in and 60in 9000 series TVs.

Philips has completely redesigned its Smart TV interface and linked-up with new content providers, including Acetrax and now Blinkbox. The integrated WiFi means you can also record via USB and share content using DLNA.

There's also an update to the Philips MyRemote app for Android and iOS allows you to control your TV, throw content from your phone or tablet to the TV and view live TV on your portable device.