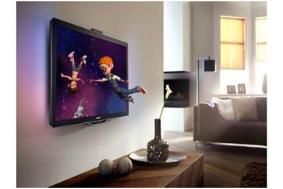 Star of its stand here in Berlin is the world's first Cinema 21:9 Platinum Full HD, 3D TV, which will work with multiple pairs of Philips's active-shutter 3D glasses.

The 58in Cinema 21:9 set has Perfect Pixel HD processing, three-sided Ambilight, LED Pro, 400Hz and 'multiview' technology, the latter allowing you to check what's on Philips's NetTV service while continuing to watch another broadcast programme.

Talking of NetTV, Philips has joined forces with Sharp and Loewe to co-develop an open IPTV platform, bringing video-on-demand, apps etc to sets across all three brands. "We want to make it easier for content providers to make apps for connected TVs," says Philips. Sounds good to us.

As for 3D, Philips believes the choice of whether to upgrade to 3D or not should be left to the consumer. So its 8000 and 9000 series TVs are 3D-ready, just needing a 3D transmitter and 3D glasses pack to turn a 2D TV into a 3D one.

It's introducing a new Philips 9000 series 3D Blu-ray player, with wi-fi, DLNA support and NetTV, to partner with its 3D TVs.

Other highlights on the Philips stand are its new range of customisable Ambilight TVs. Basically, you'll be able to design and order your TV online, having it delivered to your home. So you can choose the colour of the frame, type of stand and style of remote you'd like. Nifty.

Philips says the custom ordering service will be trialled in Europe from October. If it's successful, it will come to the UK in 2011.

And like most of its competitors, Philips has a new 'green' TV, the EcoNova 6000 range, which is said to use half the power of some other sets and is made from 60% recycled materials.

As for audio, there's a Philips 360 Sound system to go with its TV range, and the SoundSphere music system which we'll be testing in our November issue, on sale in a couple of weeks' time. The company has also partnered with sports brand O'Neill to create four new headphone designs for sporty types.

And as confirmed yesterday, the new Philips GoGear Connect is a Google Android-drivenportable msuic and video player.