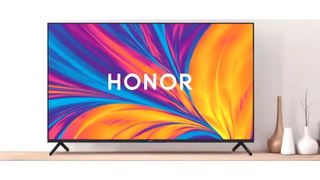 Huawei has announced its own proprietary operating system, HarmonyOS, as a contingency plan in the face of it losing access to Android amid a US-imposed trade ban. And it's debuting it in a Honor-branded smart TV called Honor Vision.

(If you’re confused as to why the announcement of the first Huawei Harmony OS product isn’t coming from Huawei directly, it’s because Huawei operates with a dual-brand strategy. Huawei is the premium smartphone maker’s lifestyle brand, while Honor is its sub-brand, focused on a younger demographic.)

According to Huawei, the traditional TV isn’t popular anymore, used primarily by people under six and over 60 years old – and that’s where the Honor Vision comes in.

Despite looking like a traditional television set, the Vision is positioned more as a smart screen, slotting in the same device categories as the Amazon Echo Show or the Google Home Hub for example.

Its specs, however, are all TV, with a 55-inch display capable of 4K and HDR playback, and a screen-to-body ratio of 94 per cent. It's just 6.9mm at its thinnest point, and the bezel is made of metal, with a curved border that looks like shiny skirting board.

The Vision is also the largest screen to feature HWA Bluetooth (a Bluetooth protocol promising high-definition wireless audio transmission), and features Bluetooth 5.0, which is good news for those who often plug Bluetooth headphones into their set.

The built-in AI-enabled pop-up camera is capable of 1080p HD capture and packs facial recognition and posture detection. It’s also able to support 5m voice pickups and can be adjusted by 10 degrees for optimal viewing angles. As for privacy, when not in use, it simply retracts back into its body – like a turtle’s head.

Despite all the conversations around HarmonyOS being a game-changer and a potential replacement for Android on Huawei smartphones, Honor’s Vision UI is clearly a TV interface. It does, however, support smartphone features.

Magic-link connects the Vision to your smartphone, with the phone mirroring its key features so you can interact with your touch display instead of the remote control. And that's not all; the smartphone can also act as a sound receiver for your TV, so if it’s late and you don’t have Bluetooth headphones, you can either listen to a movie or TV show on your phone’s speakers, or opt for the significantly more appealing option and plug in wired headphones to your phone. Additionally, the phone can act as a keyboard, which will be a godsend when logging into apps.

How does your smartphone connect to the Honor Vision? With NFC. Each Vision ships with NFC stickers that can be tapped to link the two smart devices. Tap the NFC point and you can fire photos, documents and games over to your TV, saving you faffing about with awkward pairing processes. It’s not the first time we’ve seen NFC tech on TVs, with Samsung’s Serif showcasing one-touch pairing, but Honor’s taking it all a step further.

TV Buying Guide 2019: How to choose the right TV size and tech