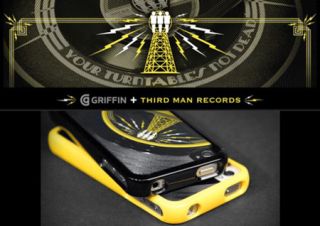 Griffin Technology has partnered with musician Jack White to 'blend vinyl records and mobile technology' - firstly by producing the Third Man 45 iPhone 4S Case: a genuine 7in vinyl single, custom-cut into a new home for your smartphone.

Griffin is based in Nashville, as is Jack White's Third Man Records company. The

Griffin and Third Man Records Case for iPhone 4S saw the two bringing in a third local business - United Record Pressing in Nashville, Tennessee - to press a series of vinyl singles produced by the record label.

These singles were then die-cut to form the protective back of the iPhone case. A moulded frame - available in black, white or yellow finishes - snaps around the iPhone, holding the record insert in place and protecting the controls, edges, and screen, with cutouts for volume, headphone, hold switch and dock connector.

The cases can be further customised with a pack of three, interchangeable vinyl record inserts( pictured above). The white back is cut from The White Stripes' Candy Cane Children; the black back from The Raconteurs' Steady As She Goes; the yellow back from The Dead Weather's Treat Me Like Your Mother.