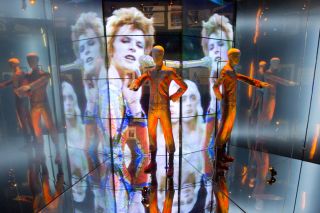 Of course, David Bowie Is at the Victoria and Albert Museum in London is a no-brainer. Anyone with even a fleeting interest in post-War popular culture in the UK knows about David Bowie, and those with ears to hear acknowledge him as one of the most influential and inventive figures in ‘pop’ music there’s ever been.

The idea of ‘art-rock’ was arguably a David Bowie construct, and equally plausible is the idea that bolting together pop music, theatre and literature has never been achieved more successfully than it was by Bowie in the Seventies.

David Bowie Is collects interviews, archive videos, notebooks and hand-written lyrics, costumes both iconic and staggeringly ill-conceived, documentary footage, news reports and, most importantly, some of the late-20th century’s most memorable and perfectly executed music and presents it almost casually.

The body of work speaks for itself, but what the exhibition brings home most forcefully is the restless, relentless imagination and ambition that has driven Bowie and his art forward for the best part of half a century.

But there’s also trademark attention to detail and desire to break new ground in the way the exhibition is presented. The V&A has partnered with audio heavyweight Sennheiser – no strangers to this website or the pages of What Hi-Fi? Sound and Vision – to deliver as impressive an audio experience as possible.

The guidePORT system is clever enough: the usual museum audio guide is brought bang up to date by the deployment of a battery of sensors and transmitters.

Thanks to 11 cell transmitters (to deliver music and soundtrack to visitors wearing a guidePORT receiver), 34 active antenna modules to drive them and 48 indoor identifiers to trigger the audio content, visitors need only wander from exhibit to exhibit for the system will deliver the relevant audio automatically.

It’s real-time, lip-sync stereo that makes the tour both fully automated and entirely personal. It’s an elegant solution and it works flawlessly.

The two 3D-audio experiences with which the exhibition culminates are even more impressive. Footage of Bowie performances are projected on a grand scale (several stories high) while the accompanying audio is delivered by concealed Klein+Hummel and Neumann loudspeakers.

Material is both mono and stereo, but thanks to some eye-wateringly complex algorithm manipulation by Sennheiser’s Gregor Zielinsky even the rarest (for which read ‘ropiest’) recordings can be and are delivered in a fantastically spatial and distinct way.

David Bowie Is opens on Saturday and runs until 11 August, after which it’s going on a worldwide tour. It’s well worth the price of admission and really needs to be heard as well as seen.