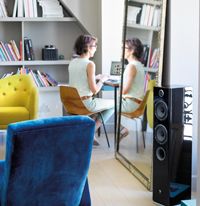 On the way in October is the Focal Easya wireless speaker system, selling for an expected £2000 and designed, the French speaker company says, for 'the post-docking era'.

The system comprises a pair of powered floorstanding speakers, available in gloss white or gloss black, along with a transmitter hub (above) to which everything from your mobile phone to your TV can be connected.

The hub has aptX Bluetooth capability, as well as wired connections for two digital sources (one on optical, the other on coaxial electrical), plus two analogue inputs (on RCA phonos and 3.5mm socket) and a mini-USB for computer hook-up.

A remote control is provided to switch sources.

Transmission from the hub to the speakers, which each have 85W of amplification onboard to drive two 13cm Polyglass mid/bass drivers and the company's new TNV2 inverted dome tweeter, uses the Kleer system to send separate signals to each channel.

Focal explains that an important part of the design was to have just one cable – for mains power – going to each speaker.

Kleer was the best way of attaining CD-standard 16-bit 44.1kHz sound quality without having to resort to a more conventional 'master and slave' speaker set-up, in which one speaker contains all the active electronics, and feeds the other enclosure via conventional speaker cable.

As a result, the Easya system offers greater freedom of set-up and positioning, due to the lack of any physical connection between the speakers.

Like all of Focal's mainstream speakers, the Easya system is being built in the company's factories in France, which also assemble all the drive-units used in the new speakers.