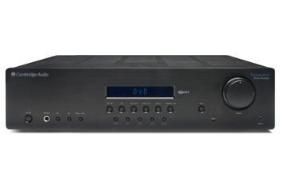 First to the UK in Cambridge Audio's new Topaz range (see below) will be the SR10 stereo receiver - due in Richer Sounds stores from mid-February, priced around £200-£230 (depending on iPod dock bundle).

Cambridge Audio believes the Topaz stereo receiver - which also features a phono stage, incidentally - will be particularly popular as a 'starter' hi-fi, together with its matching dock plus a pair of speakers.

We'll be the first to review this budget-friendly product shortly; expect a review next month.

Blu-ray and HD receiver also due in February

February will also see the long-awaited launch of the Cambridge Audio 650BD universal Blu-ray player, followed by the matching 650R 7.1 receiver. Both these 'Azur HD' products will be tested first by What Hi-fi? Sound and Vision - watch this space for the forthcoming reviews!

Famous for delivering fine performance-per-pound value products to the hi-fi market, Cambridge Audio has announced a new range of affordable separates at CES in Las Vegas.

The Topaz range includes three products: the AM10 stereo amplifier, CD10 CD player and a stereo receiver, the SR10.

The AM10 integrated amp has the familiar brushed aluminium exterior, 35 watts per channel of power, five line-level inputs and a built-in MM phono stage.

You'll find a front-mounted MP3 input too, twin speaker outputs and of course a remote control.

If you're still in the habit of listening to CDs, then the CD10 should serve your needs. A Wolfson DAC does the donkey work, digital and analogue outputs, and playback of MP3 and WMA files on disc, too.

Also new from Cambridge Audio is the SR10 receiver, which packs 85 watts per channel, FM/AM tuners, five inputs including a front-mounted line input aimed at iPod owners and a remote control.

All brought to you in black, the SR10 will be out in February with the rest of the Topaz range to follow soon after this Spring. Prices are TBA at the moment but we'll let you know as soon as we do.