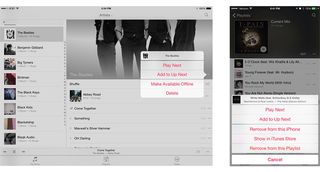 The beta includes various enhancements to Apple’s mobile OS, the most notable of which apply to the Music app.

New features for the app include an updated design, which Apple says “makes exploring your music collection easier and more fun”. Playlists can be personalised with your own images and descriptions, and albums can be played by just tapping on the artwork and no longer require you to open the album up first.

Your most recent albums and playlists will now appear at the top of the music library. There's also a new on-screen MiniPlayer, which leaves listeners free to browse their music collection.

iTunes Radio (currently only available in Australia and the United States) gets a couple of new features: your most recently listened to stations to can now be accessed quicker and curated stations are available in the 'Featured Stations' section.

Songs that are queued via a playlist or album can be previewed in a new 'Up Next' window, and this list can be customised.

Finally, the iPad version of the app receives a new split-screen interface, while iPhone version loses the app's landscape view.

MORE: Will Apple's iTunes streaming service blow its rivals out the water?