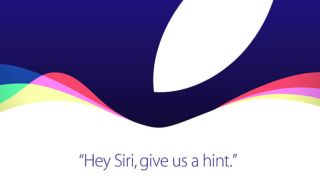 The invite comes with the tag, "Hey Siri, give us a hint", suggesting Apple's voice-controlled personal assistant will feature heavily in whatever's new.

As well as new flagship phones to follow the iPhone 6 and iPhone 6 Plus, rumours still suggest there could be a cheaper iPhone. The iPhone 6C? We shall see.

Elsewhere there's a fair chance we will hear about a new Apple TV box, which is rumoured to come with Siri voice control, fitting in nicely with the theme, and a redesigned interface.

It's unlikely we'd hear about iPads at the same event, so the long-running rumours of a super-size 'iPad Pro' are likely to remain just rumours for now.

Apple has confirmed it will be streaming the event live on its Apple Events page. And for the first time, this won't be limited to Apple devices, the stream supporting PCs with Edge on Windows 10.

The Apple event gets under way at 6pm GMT UK time (10am PDT) on Wednesday 9th September.