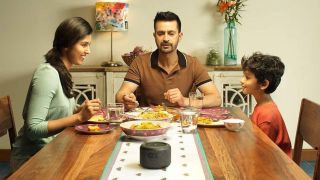 Amazon has quietly announced a new Echo speaker, and it's unusual for three reasons: it's powered by a rechargeable battery (rather than through the mains); it's only available in India (for now, anyway); and it's rather strangely called the Amazon Echo Input Portable Smart Speaker Edition.

The new smart speaker has a 4800mAh battery, which Amazon claims will run for 10 hours of music playback before needing a recharge. On standby, it should last 11 hours.

The idea is that you can move the speaker from room to room as you go without the faff of unplugging it and plugging it back in. "Portability has been one of the most requested features in India," said Amazon’s Alexa devices VP Miriam Daniel, as reported by TechCrunch. "You want to be able to carry Alexa with you from room to room within your homes. So we have designed something just for you."

Amazon has only launched one battery-powered Echo device in the West, the Amazon Tap. After unfavourable reviews, it was discontinued last year. Unlike the Tap when it was introduced in 2016, though, you won't need to press a button on this new speaker to activate Alexa.

According to TechCrunch, Amazon executives said they intend to bring the new speaker to other countries "eventually".