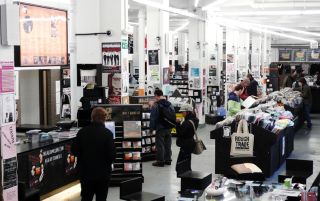 In the last three months, 15 per cent of of people who bought music on CD, vinyl or tape cassette, bought something that they had no intention of ever listening to. 53 per cent bought a vinyl record, 48 per cent a CD, and 23 per cent an audio cassette tape, which they didn't plan to play.

This practice was most obvious with vinyl and in 18-24 year old music buyers - 26% of this age group bought music to own rather than to play.

The research, released by ICM, showed physical media still had a noticeable edge over downloads, with 57% of people buying a CD compared to 39% who bought an "MP3 download" (we assume that's not actually specific to MP3s as the research references iTunes, which uses AAC files).

Respondents said that in the last month (they were asked in April 2015), 23 per cent had bought a CD, 10 per cent a vinyl record (up from 5% last year) and 5% had bought a cassette tape (up from 2 per cent last year). Only one in five (20 per cent) had purchased a download.

While many have attributed the rising popularity of vinyl to a younger audience, the biggest growth in the last 12 months, according to ICM, has come from 25-34 year olds. 26 per cent of those polled in that age group having bought vinyl in the last month, up from 9 per cent last year.

Sales of casette tapes have been driven by independent labels and high-profiles releases, such as the Awesome Mix Vol.1 featured in Guardians of the Galaxy. 13 per cent of 25-34 year olds and 10 per cent of 18-24 year olds said they had purchased a cassette in the last month, according to ICM's poll.

And the survey showed independent record shops, such as Rough Trade East in London (pictured, top), were the places that people most enjoyed buying music, with respondents saying they were more likely to spend more - and were happy to do so - in an independent record store. Good news ahead of Record Store Day 2015.

Online remained the dominant way to buy music, however. Amazon leads the way with 22 per cent of people saying they'd bought from the site in the last month, followed by iTunes (11 per cent) and then eBay (10 per cent).

On the high street, supermarkets accounted for 12 per cent of music sales, with independent record stores and HMV at 6 per cent each.