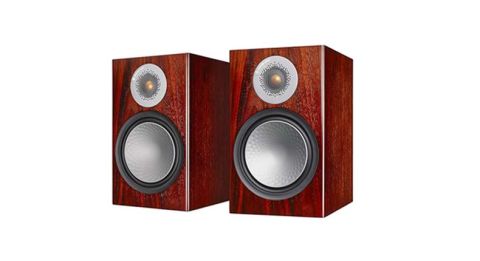 It’s more of the same from Monitor Audio’s latest Silver range, and it simply leaves us wanting to test the next pair

If we review any more products in Monitor Audio’s sixth-generation Silver range, we may need a new thesaurus. Having reviewed the Silver 200s and the corresponding surround package, we have already used up quite a few of our superlatives.

These Silver 100s are effectively the fifth member of the group to pass through our testing rooms - and with the company highlighting the shared family characteristics, it’s possible we might struggle for new ways to describe them.

As it happens, we’re just as loathe to box them back up as we were their siblings.

The larger of two pairs of standmounters in the series, the Silver 100s are chunkier than the Silver 200 floorstanders that won an Award last year, largely thanks to their bigger mid/bass drivers.

Whereas the latter comprised a pair of 13cm C-CAM (ceramic-coated aluminium/magnesium) drivers each, these have just the one. It measures 20cm.

It doesn’t add a whole lot of heft to the overall design, which still sits nicely within Monitor Audio’s ‘modern living’ intentions - in fact, it feels as though it offers more for the money.

It’s the same basic design as the Silver 200, despite the different sizing, an impression aided by the DCF coupling mechanism trickling down from the company’s flagship Platinum II Series - it's intended to lower distortion and deliver high-frequency fidelity.

A HiVe II port is again also a feature, utilising a straight-rifled design to accelerate airflow and reduce turbulence. Effectively it moves air in and out more swiftly for faster, powerful bass response.

Our review sample this time is finished in walnut, but other options on offer are the same as throughout the range - black oak, natural oak, rosenut and high gloss black, as well as the satin white we've seen before.

With so much in common with the speakers we’ve already heard from the Silver range, it comes as little surprise the performance is equally laudable.

Again they take a couple of days to properly run in, which is a little longer than the majority of loudspeakers at this price - but the wait is well worth it.

Playing Bicep’s eponymous album of last year, for example, the Silver 100s don’t just time well, they’re consummately adept at delivering the energy harnessed within each snapping rhythm. At the same time they leave enough headroom for intensity to build in each track.

The focus is on overall musicality and cohesion with this current Silver range. The temptation to concentrate too intently on analytical insight, and thus leave blind spots where it counts, is skillfully avoided - but the level of detail on display here is still impressive.

There’s texture to instruments, and space within the mix for the reverbs that dictate much of the atmosphere. While nailing a recording’s ambience is high on the Silvers’ 'to-do' list, at no point do we feel we’re sacrificing resolution: these are very much the hi-fi speakers Monitor Audio promised at the outset.

But it is the punch and dynamic expression that sets these standmounters apart from most of the pack.

Switch to a more vocal-intersive recording in The Twilight Sad’s Fourteen Autumns and Fifteen Winters, and the emotion in James Graham’s voice is penetrating - light is thrown on the inflections in his accent, as well as the intensity of his delivery.

The Silver 100s are given an opportunity to prove their smooth balance, standing on tip-toe to reach those soaring guitar lines, fully charged but without the coarseness that (in lesser hands) can have these arrangements giving the listener's ears a pretty exhausting work-out.

The bass lines that anchor the piece are beefy as well, warmer perhaps than with some competitors but not overly soft or distractingly rumbling.

As with the rest of the range, the Silver 100s are versatile with positioning - putting them right up against a wall will obviously accentuate that bottom end, but without sacrificing too much of the pace or dynamics that are among the range’s true fortes.

The most obvious comparison here are the Award-winning KEF Q350s, which are usefully cheaper at £530. Which speakers we’d take home is a conversation that leaves our team pretty split, and that’s to both pairs’ credit.

The KEFs are more refined, sacrificing some of the Silver 100s’ muscle and energy to deliver a slightly more polished performance - but it's largely a question of preference over objective supremacy. These Monitor Audios justify their price tag quite easily.

That price, mind you, when you factor in the cost of an appropriate pair of speaker stands, puts the Silver 100s quite close to what you pay for the floorstanders sitting next up in the range. The fact we might even end up plumping for the Silver 100s is evidence of just how high is the regard in which we hold them.

It’s too early to say whether the Silver 100s will end up following family tradition by taking home an Award, but as it stands they are set fair to be in the mix.

Though it may feel like we’re repeating ourselves each time we review a representative of this latest range, the process by which we arrive at the same conclusion once again has been anything but repetitive.