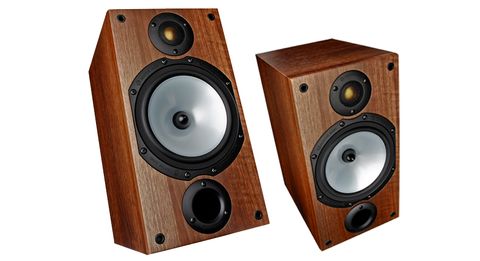 Not class leaders, but nonetheless a tempting buy if you like clear, precise and detailed sound

It’s music to shoppers’ ears when an established hi-fi brand brings out an affordable speaker range. The BR (Bronze Reference) series was Monitor Audio’s budget offering until it was replaced in 2010 by the slightly pricier BX series.

A year later, the company decided to re-define its ‘meaning of entry-level’ by introducing its most affordable range yet: the MR (Monitor Reference) series. We’re told this was in response to international distributors wanting a cheaper range than the BX series at the time.

Essentially, the MR series is based (given a few tweaks here and there) on the old BR range in terms of technology and engineering – but at a lower price. It mirrors the now obsolete BR series line-up model-for-model, too, comprising a subwoofer, centre speaker, two pairs of floorstanders and, finally, two sets of bookshelves – the larger of which we have here.

The MR2 packs a lot of technology into its modest £160 price tag. Peeping out from underneath a protective metal-mesh grille is the company’s long-utilised C-CAM (ceramic-coated aluminium/magnesium) tweeter: a rigid, yet light, composite design, gold anodised to a specific thickness for improved rigidity and damping.

Since the BR2, changes to the tweeter chamber have been made to improve damping, in turn controlling undesired resonances for a smoother response.

While the mid/bass drivers in Monitor Audio’s higher-ranging speakers (in the BX range, for example) are a similar aluminium/magnesium amalgam, the MR2s feature the company’s patented MMP II mid/bass driver. The cone is made from a lightweight polymer plastic, which is loaded with metallic particles to increase rigidity and responsive.

Furthermore, the manufacturing method modulates cone thickness at critical points to optimise stiffness and consistency too, while the short voice coil is designed to give the driver improved response and efficiency.

Despite being at the value end of the company’s offering, the MR2s have all the class and style we’ve come to expect from the brand. Beautifully finished in your choice of black oak or walnut vinyl, the front-ported cabinet wins beauty points with nicely rounded-off edges and a smart, yet traditional, fascia.

The MR2s should be set on decent speaker stands (something like Atamaca’s Moseco 6s), but they aren’t too picky about placement; placed close to a wall or pulled out slightly, they’re nicely balanced, detailed and as precise as they come at this price.

They do sound a little less substantial out in the middle of a room, but not disastrously so. They aren’t the richest sounding speakers anyway, so partnering with solid-sounding kit will see them right at home.

There’s maturity to the sound that’s rare at this level. As we play Michael Simone’s Any Other Name, the MR2s flourish with insightful delicacy on the intimate string of piano notes. The sequence is packed with variation, and each key is punctual and meticulously placed within the soundstage.

They prove just as pleasing with vocals – as Kate Bush proves on 50 Words For Snow, the Monitor Audios reveal her eclectic delivery and emotional nuances well. This deftness isn’t without vigour and vim, though.

It’s hard to sit still during the MR2’s relay of Michael Giacchino’s Married Life (from the Up soundtrack): the playful, buoyant nature of the track is to a T, delivering the orchestration with gusto, and applying the dynamics to accentuate its peaks and crests.

The MR2s might not match the most powerful-sounding speaker among their rivals, but can pack considerable punch given the opportunity.

Elsewhere, bass is tuneful and controlled. We found the speakers needs around a 100 hours run-in for the treble to adequately integrate itself with the frequencies below it, though even then lacks the refinement of some of its peers. We’d stay away from bright or particularly unrefined electronics.

Our award-winning Wharfedale Diamonds 220s set a benchmark for detail and dynamic subtlety that the MR2s can’t quite reach – and although this brings the Monitor Audios down a peg as a result, they still do budget hi-fi remarkably well.