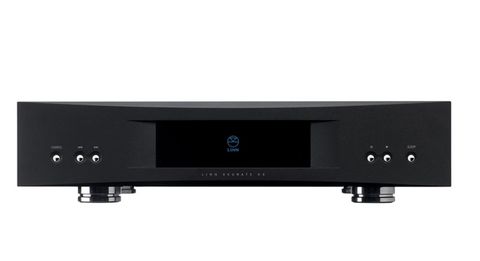 Linn's Akurate DS media streamer is one of two streaming solutions in the company's Akurate range, which itself sits between the entry-level Sekrit, Sneaky and Majik ranges, and the flagship Klimax models.

In all but the Sneaky line, you get a choice of two models: the straight DS player, ready to be connected to an integrated amp or preamp, or the DSM version complete with analogue and digital inputs, and designed to be used straight into a power amp.

You can even use mutiple DS units to deliver whole-house music, with a Songcast feature allowing them all to be synchronised to play the same content in all rooms.

Those ten players are an indication of Linn's growing commitment to streaming music since it famously announced it was discontinuing CD player production, and it's something the company backs up across the board.

Its in-house Linn Records label, for example, offers a range of high-resolution recordings for download at resolutions up to 192kHz/24-bit, and as well as its own excellent Studio Master offerings is now acting as a hub for downloads from other labels. It's recently started offering titles from the Universal Music catalogue, including classic Decca releases.

The story continues with three-320kbps Internet radio stations that showcase Linn’s mostly jazz and classical catalogue, and which of course can be played, along with all those hi-res downloads, by the Akurate DS.

This unit is compatible with most file types, including WAV, FLAC and ALAC (otherwise known as Apple Lossless) up to 24Bit/192kHz, and can stream them from any UPnP storage device.

But unlike most rivals, the DS won't let you plug in USB storage devices, which is a shame, and neither does it have connectivity for iPods, iPhones and the like.

Oh, and Linn doesn't do wireless, believing a wired Ethernet connection is the route to the most stable music streaming. So as a minimum you're going to need a NAS device and a router to 'feed' the Akurate DS, or preferably a 'closed' system for music, using a NAS device and an network switch device.

On the upside, though, you get Internet radio – all the better to enjoy Linn’s radio stations – and the ability to control volume via the media player’s XLR or single-ended outputs.

The sound here is very clean and precise, not always resulting in the most relaxed listen, but giving the overall presentation an impressively stable structure.

Taking advantage of Linn’s high-res downloads – we used Beethoven’s Piano Concerto No.5, played by Artur Pizzaro and the Scottish Chamber Orchestra under Sir Charles Mackerras, in 192kHz/24-bit – the Akurate DS has all the delicacy and refinement even the most critical of listeners could demand.

And it combines that with a mass of harmonic detail conventional 16bit/44.1kHz recordings could never capture: this power, precision and composure is deeply impressive, as is the sense of space around instrumental threads.

Move on to a 44.1kHz/16-bit - ie CD-quality – recordings and there’s an expected drop in overall resolution and refinement, but the sonic signature doesn’t change. There's punch and a tight grip on the bass, with high levels of insight coupled to exceptional control and authority.

This is an impressive streaming player, trading features for a confident, involving sound, and really showing the advantages of those hi-res recordings Linn champions so well.

See all our Best Buys