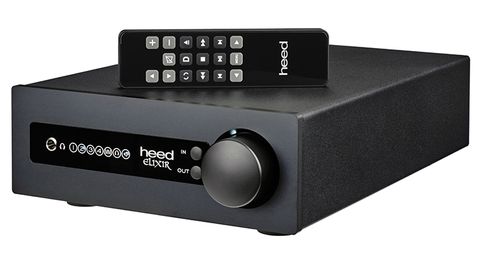 If you only need analogue inputs, this entry-level Heed is worth considering

After going upmarket with the high-end Thesis range, Heed Audio has returned to more humble pastures with its new Elixir: an analogue-only integrated stereo amplifier targeted at first-time hi-fi buyers.

More affordable than usual for the Budapest-based brand, it sits below the Thesis and Obelisk lines, but borrows the design principles found in Heed’s TransCap amps, like the 2012 Award-winning Obelisk si, and has a decent output of 50W per channel into 8 ohms (or 65W per channel into 4 ohms).

So what gives? Our first thought is that the Heed feels like a cheaper product than its price suggests.

Everything from the half-width casing (available in black or silver) and the front panel controls to the compact remote control feels a little too budget for our tastes, even if the build quality seems solid enough.

The simplistic labels that light up for each don’t help the Elixir’s cause, nor do the dodgy font choices.

Lined up next to its biggest rivals, including the Rotel A14, Audiolab M-One and Cyrus ONE, it’s almost certainly going to be your last pick.

There’s also the absence of a DAC, and unlike some of Heed’s higher-ranging models, it isn’t compatible with the brand’s separate DAC module.

Ergo, digital responsibilities will have to be taken care of by a CD player or streamer, which can connect to the Elixir’s four line-level inputs.

The Heed can welcome a turntable with open arms though, thanks to its built-in moving-magnet phono stage, based on the circuitry from Heed’s dedicated (and once multi Award-winning) Questar phono amp, and a Class-A headphone amplifier drives a 6.3mm jack found on the front panel.

There are two pairs of speaker connectors onboard, and a pre-amp output for adding to the Elixir’s output if you wish.

Thankfully, no such compromise has been made where sound quality is concerned, and it only takes a brief listen to the Heed to push any reservations we have about features and design to the back of our minds.

We ease our way in with Nina Simone’s Blues for Mama, but the Heed takes no such approach. Its easy-listening balance ­– authoritative and bold, but not too forward – captures the playful persona of the schmoozy blues track from the first note.

The perky piano, cymbals and distinctive vocal are all presented on a level playing field, the latter brimming with subtlety as the Elixir ensnares Simone’s intrinsically dulcet tone and hangs onto her every rasp.

It ruminates just as much on Matt Berninger’s brooding delivery in The National’s Graceless, even if the Rega Elex-R gets under his vocal nuance more convincingly.

There’s enough space around it for the emotion and expression to come through, and that’s indication of the amp’s roomy soundstage.

It fills the space sensibly; detail retrieval is ample, which applies as much to the more inconspicuous piano notes and cymbals as the dominating drums, and dynamically it’s fluid and free.

It’s no slouch, either, driving the track’s propulsive rhythms with momentum and crisp, precise timing, and dovetailing the charged drumbeat and bass guitar into a logical whole.

But by sacrificing a little low-end weight and richness, the Heed doesn’t quite anchor the bassline as much as it should.

The case remains as we switch to Pink Floyd’s In The Flesh? on vinyl, but elsewhere we’re impressed with the Heed’s detailed articulacy and determination to afford as much energy and power to the track; good news indeed for vinyl enthusiasts.

By pitching itself as a beginner-friendly, analogue-only amp, the Heed Elixir puts itself somewhat on the back foot in terms of versatility, especially in the face of its many DAC-including, hi-res music-supporting rivals.

Still, it’s allowed Heed to focus on what really matters: sound quality. And it’s paid off. The Elixir is a simple machine but, for the right buyer, is no less attractive for it.

See all our Heed Audio reviews