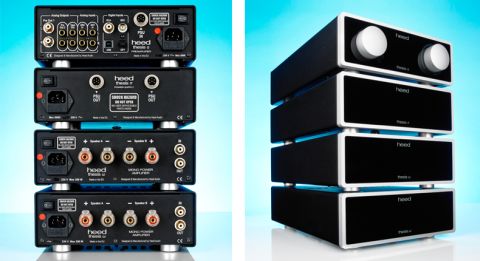 A likeable combo, but the lack of finesse and the price make it hard to recommend

Heed Audio first came to our attention a few years ago with its £1300 Obelisk si amplifier. This simple, highly musical little integrated won our hearts, and an Award, back in 2012.

The Budapest-based company has got a whole lot more ambitious since then, and pushed well upmarket with the high-end Thesis range. The range consists of four products at the moment.

The Thesis appearance mirrors the minimalist ’80s feel of the Obelisk si and is none the worse for that. It’s a clean, simple look and we like it. For the most part build quality is good. The components feel solid and nicely finished, but there’s not quite the luxury feel we expect at this price.

The controls, particularly the input selector, could feel a little more precise in use, and the remote feels laughably cheap. That said, Heed is not alone among high-end manufacturers in supplying a poor wand.

Connectivity is decent. The α preamp has two single-ended line-level analogue inputs and four digital – co-ax in RCA and BNC form, optical and USB. You can use the preamp without the outboard π power supply (a tidy and entertaining sound), but adding it brings notable gains in scale, insight and transparency.

The ω monobloc power amplifier presents a simple face to the world, lacking any controls on its clean front panel. Look around the back and you’ll find a single RCA input and two sets of speaker outputs to make bi-wiring easier.

There’s also a line-level output to allow additional power amplifiers to be connected should you want more grunt. We’d be surprised if you do.

Don’t let the compact size fool you; this is a proper powerhouse, delivering 160-watts of continuous power into an 8 ohm load, and capable of driving electrical loads down to 1.6 ohms. It doesn’t run too hot either, so won’t need acres of space around it to breathe.

How does the four-box combination sound? Pretty good, we think. The Thesis delivers a surprisingly solid, robust sound backed up with the kind of authority that scarcely seems possible from such compact boxes.

We start with Tchaikovsky’s 1812 Overture and like a lot of what we hear. It’s detailed, organised and composed, keeping track of the mass of instrumentation without trouble.

This is an amplifier that concentrates on the big picture, painting in broad strokes and giving a clear view as to what the music is about. It delivers the explosive energy of this Tchaikovsky piece superbly.

Large-scale dynamics are delivered with enthusiasm, punch (particularly in the low notes) and plenty of muscle – that 160W power rating is entirely believable – while stereo imaging is secure and focused. Change over to Nick Cave’s Mermaids and the Heed’s cohesive delivery continues to please.

It digs up a decent amount of detail and arranges it into a cohesive and convincing whole. It’s surefooted rhythmically too, giving a palpable sense of momentum. Flaws? This isn’t the most subtle of amplifiers.

It doesn’t have the low-level dynamic expression we would expect at this price, so the emotion packed into Cave’s vocals doesn’t come through with the clarity we expect.

The sound could be more transparent too, our reference Bryston BP26/4BSST2 combo showing clear advantages when it comes to precision, openness and resolution. We try the on-board DAC and are left with mixed feelings.

The presentation retains the tonal balance and cohesion of the line stage but sounds thinner and less solid. It’s not a particularly detailed or expressive performance by high-end standards, so we would suggest leaving number-crunching duties to a suitable outboard unit such as Chord’s Hugo.

This Heed Thesis combination is fun, enthusiastic and communicates the music’s message well. But at this price we expect more. Greater transparency is a must, as is a subtler attitude.