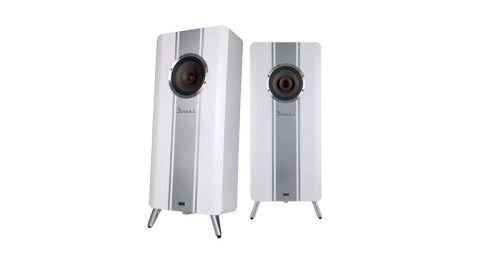 These quirky speakers are charming to look at, but lack musical integrity. A real disappointment

It’s rare a product disappoints us quite as much as these Heco Direkt Einklang stereo speakers have.

We don’t set out to give poor reviews or star ratings – we’d like every product that comes through our listening rooms to live up to its promise of good performance for its asking price. Surely the whole point of a hi-fi product is simply to deliver music in a faithful and enjoyable manner?

So when such a huge discrepancy between the potential of a product and its actual performance manifests itself, we can’t help but feel despondent.

The baby of the Direkt range from German hi-fi brand Heco, these Einklang speakers are immediately eye-catching thanks to their retro-but-modern styling and sleek racing stripes.

But these Hecos don’t live up to their impression of high fidelity. Which is a shame, because they get off to an impressive start.

Any initial reservations about the quirky design soon give way to admiration once we assemble and position the Heco Direkt Einklang.

The tilted-back stature, wide-fronted baffle with its racing stripes and contrasting wood pulp paper cone, look eccentric and elegant by turns. The longer the time we spend with them, the more we find ourselves charmed.

They’re built to a high standard, too. The sleek lacquer finish, either in black or the white with silver stripes of our review sample, looks sophisticated - and the metal feet are sturdy and easy to attach.

The unusual shape of the speakers means they don’t take up too much space. And while they’re not exactly discreet, they don’t stick out too much either.

But the most unusual thing about the Einklangs is that single drive-unit.

Unlike other single-point-source designs, such as KEF’s Uni-Q array (which has two units: a tweeter placed in the throat of a midrange/bass driver), the Heco uses a single driver with two cones. The horn-like ‘whizzer’ sprouts from the full-range 21cm cone - but they’re part of the same driver.

Not only is this unusual in the world of hi-fi speaker design, it’s also the only single-driver model in Heco’s speaker line-up.

There are pros and cons of a single-source speaker design. The advantage is it eliminates the need for a crossover, leading to a more direct link between the drive unit and amplifier - the benefits include increased transparency and less distortion.

The disadvantages are equally obvious: it’s a single driver trying to cover the entire frequency range, which is difficult. The extreme ends of the frequency range suffer, as the cone can’t reproduce super low-end frequencies or the highest treble without struggling.

The Hecos need a few days of running in to fill out some of their out-of-the box thinness. We normally give new speakers a weekend before serious listening, but these take a full working week to warm up sufficiently.

We also take some time to position them correctly. Placing them near a wall adds some much-needed weight to the Hecos’ sound, but pushing them too close takes away some openness. The two downward-facing ports make the speakers a little less sensitive to walls than a conventional rear-firing design arrangement would be.

The speakers have a high sensitivity (94dB), which means they can be driven easily with lower-powered amplifiers and still achieve high volume levels. That could save on system costs.

We don’t often see single-driver designs, but our experience with Eclipse’s excellent speakers has us hoping for potent performance. But our hopes are dashed once we start listening.

Any advantages in sonic performance gained by having a single driver – agility, dynamics, detail and focus – are outweighed by shortcomings elsewhere. It’s a huge let-down.

The speakers’ lack of bass weight is apparent from the start. There just aren’t the lush layers of depth and texture we expect in Sbtrkt’s Wildfire, but even accounting for the lightweight bass delivery, we’d hoped the Hecos would make up for it in other ways. Sadly, they don’t.

The overall tone is fairly benign at first, with the Hecos delivering a good amount of detail when playing Nine Inch Nails’ sparse and brooding Something I Can Never Have. Piano notes tinkle away, Trent Reznor’s voice has crispness.

But closer listening reveals the Einklangs lack solidity and expression. They don’t communicate the rising intensity of Reznor’s angsty singing, or the pounding of piano notes, well.

Their sense of drive isn’t as immediate as we’d like - the vocals sound laboured as the song reaches its crescendo. There’s a shortage of punch and attack too.

With no solid base to underpin the musical notes, the sound is unmoored. That insubstantial quality to the Einklangs’ sonic character means everything from guitar strums to voices (one aspect the Heco's configuration should guarantee they do well) lack natural warmth.

Radiohead’s Everything in its Right Place is a demanding piece of music, but it doesn’t do the Hecos any favours. The engulfing ambient noises all have their place in the song, each with its own tone, character, depth and intensity - but the Einklangs aren’t capable of making sense of it.

They simply don’t have a strict enough sense of control or rhythmic precision to handle all the elements at play here. The speakers fling out a decently wide soundfield but, in their confused state, the instruments tend to blunder into each other.

One thing these speakers do well is the stop and start of notes. The snappy drumbeat and hi-hats in Michael Jackson’s Billie Jean are surgically clean and terrifically precise. Every note is pulled taut. It’s a morsel of brilliance in an otherwise disappointing and messy performance.

There are more capable and enjoyable speakers available for much less money, such as the ATC SCM 11s (£1300) or the Fyne Audio F501 (£1200). Or if you want to invest even more in your hi-fi, the musically capable and engaging Spendor A4s (£2195) are cheese to the chalk.

If this review sounds harsh, it’s not just because we are disappointed by the pedestrian and disorganised sound - evn though from speakers costing the best part of £2000, we expect a certain level of quality.

But there are basic musical elements missing in the Heco Direkt Einklangs we would expect to find in a mid-priced £500 speaker.

On that criteria alone, this isn’t money well spent.

See all our Heco reviews