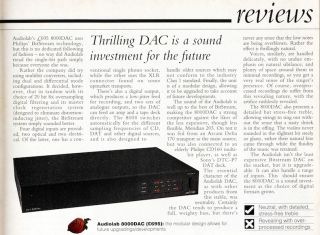 Audiolab's mighty M-DAC dominated its area of the market for the best part of five years, and remains an effortlessly brilliant piece of kit. And it maybe shouldn't have been a surprise; Audiolab has produced some classic DACs over the years.

The DAC dynasty started with the company’s original number-cruncher, the 8000DAC. We reviewed it back in our July 1992 issue and rated the unit high enough to give it an Award later that year.

The 8000DAC was a neatly made thing, finished with a professionalism few homegrown rivals could match. At the time its connectivity was considered extensive, having two optical and two coaxial inputs.

That might sound limited by today’s standards, perhaps, but remember the only readily available digital source was CD. Minidisc and DAT (Digital Audio Tape) existed, but had barely scratched the mass-market consciousness, while the whole high-resolution audio thing was years in the future. In the 8000DAC’s day even the ability to handle 44.1kHz and 48kHz sampling rates would be considered worthy of credit.

When it came to sound we noted its tonal neutrality and the impressive resolution on offer. The 8000DAC’s dynamics were well developed and there was plenty of precision. These same traits are still very much apparent in the M-DAC.

Yes, the current DAC looks different, and adds greater technical sophistication, but compare the two and the common DNA is clear. And we love them both.