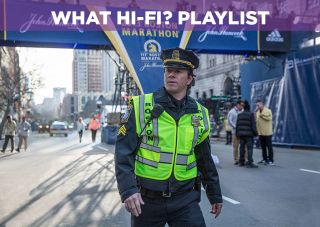 Patriots Day recounts the events of 13th April, 2013 when two brothers - Dzhokhar and Tamerlan Tsarnaev - detonated bombs at the finish line of the Boston marathon, killing three people and injuring several hundred others.

It reunites director Peter Berg with his Deepwater Horizon and Lone Survivor star Mark Wahlberg and continues Berg's recent streak of dramatising real-life events, with Wahlberg's Boston PD officer Tommy Saunders at the forefront of the investigation into finding the perpertrators of the bombing.

Patriots Day feels sadly relevant today, four years after the events it depicts. An accusation levelled at Hollywood is that it depicts real-world events too soon and in doing so exploits them, but when is there a good time to tackle a subject as difficult as this?

Patriots Day at least handles the events with respect and compassion for (most of) its characters, marking out the small moments of heroism that led to the eventual capture of the Dzhokhar Tsarnaev (Alex Wolff) a few days later.

The film's roster of characters is briefly introduced during the opening scene, leaving you wondering how they will fit into the day's events.

It's a somewhat odd, out of character opening, inflected as it is with some comedic touches (especially with Wahlberg's introduction, a composite of several characters from that day). You could argue that it's being manipulative in the way it sets up the audience's response to the characters, but generally the set up achieves its aims of both showing who these people are and also layering in a sense of foreboding.

Like Deepwater Horizon it's an unfussy and direct film and also like Horizon it's rather thin in terms of character depth. We get the broad strokes of each character, but not much, if any, insight into them. This becomes an issue with the Tsarnaev brothers.

They are, of course, the villains of the piece and while the film gleans some tidbits from their relationship, such as Tamerlan's (Themo Melikidze) hold over his younger brother Dzhokhar (Wolff has quite the unnerving presence), they feel less like real people and more like spooky conspiracy theorists detached from reality.

Perhaps that's deliberate, but there is something a little unreal and less rounded about them, which includes Tamerlan's wife Katherine (Melissa Benoist, Supergirl). There's not much insight into their psyche, nor does the film give much of a motivation for their acts.

Despite that, Patriots Day engages, especially once the film switches gears into a police procedural when the FBI, headed by Kevin Bacon's Special Agent Richard DesLauriers, begins to piece together the clues of the day.

There's plenty of great acting talent on display, including John Goodman's Commissioner Ed Davis, and while they don't get to do much other than butt heads, the conflict between the various parties over how to handle the situation brings conflict and drama to the film.

Seeing how the characters introduced at the beginning then come into the fold as the film turns into a thriller for the last stretch brings some narrative satisfaction. The action scene towards the end is thrillingly done, with the film not shying away from throwing in a few violent and shocking moments, though attempts at humour come across as somewhat clumsy.

On the A/V front Patriots Day puts in a excellent performance. The image quality varies as the film uses a number of sources whether it's handheld camerawork, GoPros, CCTV or what looks like actual news footage from the day so the first half of the film is inconsistent in terms of picture quality.

It's not a film that draws attention to itself visually, keeping things fairly natural and neutral, and almost adopting a documentary style to the presentation.

Browns and blues are prevalent at the start before the film gradually becomes a little more expressive (establishing shots of Boston are full of punch and colour). There are shots throughout the film that are slightly out of focus at times, most likely because of the docu-style the film employs.

Detail is excellent with lots of small details (such as the dust on Wahlberg's uniform throughout the film's first half) noticeable. There's plenty of emphasis on the injuries sustained in the attack, which look vividly gruesome.

The film's second half takes place at night and the blacks are good, the image sharp and clean. We didn't notice any loss of detail in night scenes. Skintones look a little understated, perhaps due to the film's slightly desaturated look. Nonetheless it's a fine looking film.

The sound is better, the DTS:X track (which seemed to downsample to DTS-HD audio) providing plenty of oomph and clarity. The explosions at the marathon reverberate around the room and the positioning and panning of sounds is effective in conveying confusion in the aftermath of the attack.

The variety of techniques used - whether it's the sound cutting in and out or the use of distorted sounds - makes for an unnerving and jarring scene. The shootout towards the end of the film is at times cacophonous, but not to the point where things become muddled.

Dialogue is prioritised in the centre and Boston accents are never a problem to understand. The score by Trent Reznor and Atticus Ross isn't one that necessarily grabs your attention, it's mostly very minimalist, but it does hang in the background of scenes in quite an effective manner through the surrounds.

Patriots Day resists being a gung-ho, up and at 'em flick and settles on being a respectful take on the material, depicting a city coming together in the wake of a terrible attack.

It could do with some more depth to its human characters as it doesn't give its audience a chance really to invest in the lives of its characters.

Still, it's a solid effort that sheds a light on the admirable efforts to capture the culprits. The disc is impressive with good picture and effective sound.