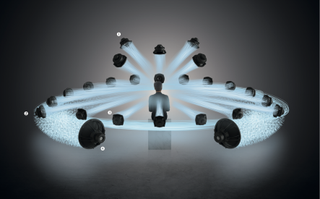 On a London island, a brief hike from Highgate tube, the constant thrum of the capital is about to melt away. We place a beautiful glass orb on a platter behind us – a sonic bubble programmed to transport us far, far away. We’ve crossed an ocean to get here, after all. Now, the only important decision standing between us and complete, 23.1 L-ISA immersive hyperreal sound is whether we’ll unfurl a screen and enjoy some visual accompaniment with our BluSpace Standard, or whether we’ll simply set our island to gently rotate, lie back, and relax.

No, it’s not a fantasy novel. This is all real – even the part about Highgate. We’re about to be led through a palpable sonic experience, the culmination of a 600-strong team led by quantum physicist Dr Christian Heil. It’s tech that is being implemented in a venue, concert hall, gallery or gig near you. And it could be in your home.

L-Acoustics is the firm behind the invention of the line source array in 1992. When Heil founded the company in 1984, it was an itch he had to scratch, a desire he simply couldn’t shake after buying a ticket to Pink Floyd’s In the Flesh tour in Paris, 1977.

Heil breezes in during our visit. Charming, unassuming and friendly, he laughs easily about leaving a burgeoning research career after completing a PhD in particle physics. “I’m sure people thought I was crazy to follow my passion for music, but I had to do it” he says. Heil attended as many concerts as he could in the late 70s, telling us, “I had to be honest, I didn’t like what I was hearing at times. And I decided that if we can make it better, if that technology can exist, we should do it".

Throughout the 90s, Heil and his growing team (from less than 10 in 1992 to 600 employees today) worked hard to offer something more convenient and better for the touring artist. It's a dream that he and his company have realised – and then some. To date, approximately 10m people have experienced what L-Acoustics can do with sound: Mark Knopfler's European tour, alt-J at the Albert Hall, Aerosmith in Vegas and Bon Iver as well as the venue EartH in Hackney (to name but a few) have all worked closely with the brand's engineers.

We gingerly assume a centrally reclining position on the vision of muted hues, plush carpet and cushioned, ergonomic shapes that is the L-Acoustics' Island. And then we feel ourselves relaxing – in fact we don't ever want to move again. Behind us, the L-ISA Bubble deck receives its spherical glass album; L-Acoustics' proprietary physical music source recorded in BluSpace 23.1 Standard. A reassuringly weighty, wireless volume dial displaying the L-ISA logo is dropped into our lap. A certificate-slash-album-sleeve bearing the numerical edition of the Bubble we're about to enjoy is issued: Marina Rebeka's SPIRITO.

She begins to sing as if directly in front of us, on our 3m by 4.2m Island, her intake of breath and soprano coloratura both celebrated and delicately handled. Three dimensional, bowed strings are presented to our left ear as the horn section greets our right – to a full crescendo that makes the Island itself shake slightly, but never at the expense of distortion through the system's grippy, agile infra low 15 Hz bass capabilities.

Another Bubble is placed on the platter, Yapa's Tontata from the 2017 album Archipel, and it's like being at the centre of the famous Crop Over festival in Bridgetown, Barbados. Drums snap all around us and reverb whips across the opulent sofa like tangible lightning. Our inner monologue mutters But – we're in a leafy suburb in North London...

Island is compatible with Dolby Atmos and DTS:X formats, too. A screen descends and we're watching an excerpt from the new Los Angeles musical experience, Cages. It's intense – like Terry Gilliam's Monty Python animations meet breakdance and grime music – and as the sound ensconces us, the seething visuals are accompanied by shakes of our Island.

Drilling down into specifics, in its fullest configuration, Island is equipped with thirteen concert grade front speakers, five rear speakers and five overhead speakers, all supplied with ultra-linear transducers. Axial symmetry tech favoured by recording studios has been utilised by L-ISA engineers here, promising transparent and precise listening. The overall wavefront emitted through the speakers is designed to allow you to capture every individual detail without any loss of the whole.

Two subwoofers, located at the rear of Island, are equipped with transducers set in an ultra-rigid cabinet – crafted in beech. Two large laminar vents extend the playback of the lowest frequencies into the infra-low range without distortion. Below 20 Hz, the vibrations palpable through Island add that physical sensation, blurring the sensorial boundaries between hearing and feeling.

At the heart of all this lies the multi-channel L-ISA Player. It connects to external media players to access and upscale music and sound from any medium (including CD, DVD, Blu-ray and streaming services) and can be controlled via the Bubble Deck or the L-ISA Player App on a device.

The L-ISA Player sends digital audio signals to control circuits located at the heads of the 24 amplifiers, each of which promises to deliver 1 kW of power – a total of 24,000W of amplification.

Island’s inbuilt tech optimises music and sound from any medium – but of course, in order to get to the pinnacle of its capabilities, you’ll need an ultra-high definition music source.

Enter, then, those Bubbles – L-Acoustics' proprietary music format. Each Bubble contains a single album of music, specially recreated and remixed to take advantage of the installation. They are encoded in the proprietary BluSpace 23.1 immersive playback format.

We can only tell you that, during our sweet, precious, fleeting few hours with Island, we were blown away by its transparency, musicality, timing and openness. It is an elliptical, opulent, immersive sound sofa that emphatically feels like the future of home cinema. And did we mention that it'll spin 360 degrees if you want it to?

Granted, it'll set you back a not insignificant sum (prices for Island start at €358,700 – visit L-ISA for more information) but we'd welcome Island into our living room tomorrow if we could. Aspirational, yes, but oh, how we loved it.

Out of the frying pan, into the fire. Or, to put things in a more pertinent context, leaving the comfort of our seated Island, we jump headfirst into the Ocean.

We're directed to the sweet spot in the room itself and told it's a safe space; dancing often happens, there is no judgement here. We sincerely hope they mean it, because we'd like to meet anyone who can stay still when this particular L-Acoustics system shows us what it can really do.

Around us, no fewer than 18 L-Acoustics Syva mid/high speakers are installed into the walls of the room, with 13 Syva Low speakers, 12 Syva Subs and five overhead speakers all about to do their thing. There's a 15-degree frontal resolution and 30-degree rear resolution.

We're treated to The Beatles' Here Comes the Sun in Dolby Atmos, and intricacies in the backing vocals greet our left ear, the likes of which we've never detected before – and it's a track we thought we knew like the back of our hand.

At one point during our listening over the course of an hour, Bjork skulks across three of the speakers on our right shoulder, then moves right over, closer to our left ear. When she claps a percussive rhythm, however, it's a cocophony of sound all around us, as if we're between her palms.

According to the source material it is fed, each Syva in the Ocean lights up to let you know how many channels you're enjoying – right up to L-ISA BluSpace 23.1 Standard.

L-Acoustics is hosting a Pitchblack Playback event in March, where listeners enjoy music in the dark. Attendees will not be disappointed.

We try another track we know well on Tidal, Stormzy's Heavy is the Head, and the percussion is more energetic than we'd previously experienced, while emotive nuances in Stormzy's vocal are revealed. Similarly, INXS's recently remastered New Sensation, even on CD at 44.1 KHz/16 bit, is snappier at the low end and the vocal is far fuller – to put it mildly. Guitar reverb whooshes across the room, from above our left ear to down near our right foot. Not to get poetic, but it's an emotional, visceral listen.

A Radiohead multi-layered track, remixed by L-Acoustics engineers to L-ISA BluSpace Standard is nothing short of sublime in terms of the detail resolution dug up by the Ocean.

Can such speakers be fitted in your home? Yes, they can, and you don't have to spring for the full 48-strong Ocean package – much as we'd love to. Prices for L-Acoustics' S-Series Syva 2.0 package (comprising two Syva speakers, two Syva Low, one LA4X amplified controller) start at €18,510 – not including installation or VAT.

L-Acoustics is hardly sitting back on its laurels and waiting for the phone to ring, though. Head to Magazine London (near the O2) for Sphere 003 on 29th February, and you'll get to hear how L-Acoustics kits out a massive venue. The night promises a ground-breaking exploration and celebration of techno music, all played over an L-Acoustics sound system. And with pioneer of the scene Richie Hawtin taking the reins, they aren't joking around either.

We don't want to, but it's time to leave the L-ISA Highgate hideaway. We resolve to return, for the premiere of Daniel Avery and Alessandro Cortini's new record, Illusion of Time, in conjunction with Pitchblack Playback in March. And if musical clarity and sonic exploration means anything to you, you should be there too.