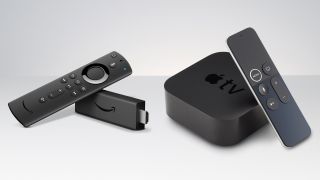 There’s a price difference of £130/$130 between the Amazon Fire TV Stick 4K and Apple TV 4K, which might make this comparison seem like a mismatch. But these are the two best video streamers currently available, with surprisingly similar features.

It’s therefore likely that you're wondering which streamer is better, and which one of the two would be the best value for money. At the very least, anyone eyeing up the Apple might wonder what they will lose, if anything, by opting for the more affordable Amazon alternative. Plus, with Amazon's many seasonal sales, you might be able to grab a bargain.

Read on and we'll highlight the various pros and cons of the Fire TV Stick 4K and the Apple TV 4K.

It’s peculiar to think of the Apple TV 4K as a big device, but the stick-shaped streamer has become so prevalent that Apple’s compact black box design looks like something of an anomaly.

In practical terms, the biggest difference is that the Apple TV 4K doesn’t simply attach to your TV. But this isn't an unwieldy set-up: it’s 10cm square and 3.5cm tall, and its remote works without line-of-sight, which means it can be easily hidden away. Ensuring it has some cool air will be useful though – we had no issues with overheating, but the ring of slim vents on the underside are there for a reason.

Though much smaller than the Apple TV 4K, at 10cm long, the Amazon Fire TV Stick 4K is actually quite large for a stick-shaped streamer. That means it may protrude past the edge of your TV if plugged into one of its sideways-facing HDMI sockets, and it can be a bit of a squeeze if the adjacent sockets are also occupied. There is, though, an HDMI extender in the box that can mitigate the latter issue, as well as improve wi-fi performance.

Amazon also recommends that the Fire TV Stick 4K should be powered via the mains, rather than your TV’s USB socket. That's a shame from a neatness point of view, but while the Amazon device is cumbersome for a stick-shaped streamer, it’s more compact and easier to hide than the Apple.

While the Apple TV 4K launched with some gaps in its feature set and app selection, regular updates meant that by halfway through 2018 it was the most fully featured device of its type.

This is a 4K streamer, but it also packs in HDR in both HDR10 and Dolby Vision forms. Unfortunately, HLG support isn’t on board, which means the BBC’s occasional 4K iPlayer streams won’t play. That isn’t a huge issue now, given the only occasional availability of the content, but it could become one in the long run. HDR10+ is missing, too, but that's not a huge issue right now, either. Of course, there’s nothing (as far as we’re aware) preventing Apple adding HLG and/or HDR10+ in the future, should they become more widespread.

The app selection also offers only a few points of differentiation. Both streamers carry the awesome Apple TV app, plus Netflix and Amazon Video in 4K and HDR, right up to Dolby Vision where available. Amazon Video also carries some HDR10+ content that the Fire TV Stick 4K can tap into, but with no labelling it’s hard to take advantage.

BBC iPlayer, ITV Hub, All 4 and My5 are available on both devices. The Apple TV 4K also gets Now TV, opening up pay-as-you-go access to Sky content, including Premier League football, although Amazon Prime Video will soon be showing exclusive Premier League matches of its own. Both streamers have VLC and Plex, should you have a digital library of your own content to play.

In terms of music services, it's more or less honours even, with both devices offering Spotify, Tidal, Amazon Music and Deezer. The Apple TV 4K also has Apple Music, of course.

The Amazon Video app on other devices is cluttered and unintuitive, which makes it a pleasant surprise that the Amazon Fire TV Stick 4K’s own menus are easy to use, thanks to bold colours, sharp fonts and fluid operation.

The Apple TV 4K still has a slight advantage here – its iPhone-like icons are stylistically a little over-familiar, perhaps, but they make it remarkably easy for you to spot what you’re looking for and access it quickly.

Both devices boast voice control that’s actually worth using, at least at times, with each having its own specific strengths and weaknesses. When correctly set-up with an HDMI-CEC-compatible telly (which is most of them), the Amazon Fire TV Stick 4K can turn itself and the TV on, and start playing an episode of your favourite TV show, all via one simple voice command.

If you already have an Echo device in the room, that voice command doesn’t even need to be issued via the remote – that’s proper hands-free operation.

The Apple TV 4K, meanwhile, boasts more intelligent, context-sensitive voice-control of content. For example, if you miss a bit of dialogue you can simply ask the remote “what did he/she say?” and it will be repeated with subtitles activated so you can be sure to get it the second time around.

When it comes to finding content, neither device has truly universal search. The Apple is closer, though, producing results from more streaming services and presenting them in a more magnanimous manner. The Amazon Fire TV Stick omits more services from its results (BBC iPlayer, for example) and prioritises its own services, which, if you're not careful, could lead to you paying to watch something via Amazon Video that’s already included in one of your subscriptions.

Video streaming has come on leaps and bounds in the last few years, but some of the more affordable devices still have a computer-like quality to the picture they produce – a lack of subtlety to colours and contrast, with some pixelation too.

But despite its price, the Amazon Fire TV Stick 4K is a sophisticated performer. It produces a sharp and detailed picture, with bright and vibrant colours that are also natural and nuanced. A little detail is missing in the very brightest and darkest parts of the image, but contrast is excellent, making for a dynamic presentation.

But the Apple TV 4K goes further, offering greater subtlety and nuance, digging up some of the bright and dark detail that the Amazon misses, and proving crisper and more three-dimensional.

There’s not a huge amount in it, but the Apple TV’s picture is more engaging and enticing, particularly where HDR content is concerned.

That the Amazon Fire TV Stick even offers Dolby Atmos at this price is a huge plus, and the fact that it actually sounds rather good is a real treat. This is room-filling sound with real weight and drama, and excellent placement of effects.

The Fire TV Stick 4K also sounds good with standard 5.1 and even stereo. This is a clear, detailed and spacious sound regardless of the format, and will reward those using a decent sound system rather than their telly's in-built speakers.

But much as it did with video, the Apple TV 4K also goes further with sound quality than its much more affordable rival. This is a more polished sound, with greater detail and low-level dynamic subtlety. It’s also a little weightier, punchier and more expansive, meaning a more exciting delivery, particularly of action set pieces.

The Amazon Fire TV Stick is a fantastically fully featured and capable streamer for the money. Even at double the price it would be a five-star product. There’s simply nothing else out there that can touch it for that sort of money.

In fact, to buy better you need to spend nearly four times as much on an Apple TV 4K. It’s a huge difference, but if you are able to stretch your budget, we think it’s worth it, thanks to the more sophisticated video and audio performance. There are those who will benefit from the extra apps - most notably Now TV and BT Sport - too.