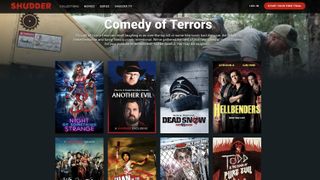 Netflix and Amazon Prime Video may be the couch potato nation's favourite all-round video streaming subscription services, but while they’ve firmly cemented themselves into TV and popular culture - and inevitably offer something for everyone with their thousands of titles - TV and film buffs with specific tastes could be better served by more niche alternatives.

So if you're a self-proclaimed cinephile or horror connoisseur, or dream of a more studiously-curated catalogue, perhaps one of these six rival services better deserve your direct debit....

Hands up if you’ve ever spent half an evening trawling through Netflix trying to decide what to watch, only to then not bother watching anything out of time-wasting frustration. OK hands down. There’s a very slim chance of that happening with MUBI, whose catalogue is always only 30 films strong. Every day a film drops off and a new one is added, with each film having a 30-day lifespan.

The catalogue itself won’t likely feature Zac Efron-starring rom-coms or the latest Marvel movie. With the service priding itself on showing – in their words – ‘forgotten gems’, ‘festival-fresh cinema’, ‘cult classics’ and ‘award-winning masterpieces’, the titles are somewhat obscure. And all the better for it.

Essentially a Netflix for horror aficionados, Shudder is the ‘home of the best horror films from around the world and beyond the grave’. With a vast catalogue of, ahem, killer content, this screaming – sorry, streaming – service is the best place on the internet to binge the unhinged, and especially great for keeping up with the latest genre releases fresh from the festival circuit.

There’s thematic collections (because of course you want a ‘Comedy of Terrors’ section to point you to nazi zombies and thousand-year-olds imps) as well as guest curations from horror film icons. There’s even a seven-day free trial for new subscribers who want to test their nerves first.

The British Film Institute takes its classic and cult films conveyance seriously, offering a library of free clips, pay-for film rentals and a monthly subscription service. The latter benefits from a catalogue that’s not only distinguished and expansive but also spans decades, so you’re as likely to see a contemporary Korean psycho-sexual thriller as you are a classic 1950s Ingmar Bergman drama.

Your guide-ian angels lie in the form of ‘Mark Kermode introduces’, ‘what we’re watching’, ‘popular’, ‘recently added’ and featured collections such as BFI London Film Festival (films from festivals past), Italian Classics (hello Roberto Rossellini) and Academy Award winners. You’ll only be able to make the most minor of dents in what the service has to offer within the 14-day free trial.

The jack-of-all-trades video streaming services is probably the least discriminatory, celebrating all film from arthouse, cult and independent to mainstream and documentary.

The eclectic service (the UK version of the original US FilmStruck founded by Turn Classic Movies and Criterion) features a ‘constantly refreshed’ library with monthly programming themes and curated sections including The Criterion Collection for long-lost gems of old, and a branded Curzon area for iconic independants and access to the Curzon Artificial Eye film library. The cinema chain is in partnership with the service, you see.

The service offers a 14-day free trial, and is currently working on a download feature for offline viewing, too.

Self-labelled ‘the best of independent film’, Flix Premiere brings films fresh from festivals to your front room. It’s another service that opts for quality over quantity - there’s only 150-odd films in the catalogue compared to Netflix UK’s 5000+, but most have been released within the last three years and every week there’s an exclusive ‘premiere’ of a brand-new title.

With its recent expansion into distribution, the service shortens the bridge between the video streaming service and cinema experience more than most. It has claimed the theatrical and online exclusive rights to Milcho Manchevski’s Bikini Moon, and allows users to register for priority access to upcoming theatrical ‘red carpet’ premieres in London, Los Angeles and New York.

It lets you gift movies to friends, too. Aww.

Nerd alert! Documentary-dedicated subscription video service Docsville – the brainchild of former editor of the BBC’s Storyville, Nick Fraser, and producer Lawrence Elman – is a godsend for anyone whose TV watching is fuelled by an insatiable thirst for knowledge.

Mostly comprising documentary films with the odd docuseries, short, and bitesized anecdotal ‘pop up’ clip, the catalogue is a fountain of knowledge that serves anyone wanting a mere trickle from it while they wait for the kettle to boil, or those with 90 minutes to sink their teeth into something meatier. The interface is pretty basic, but the ‘what’s new’ and ‘most popular’ sections are good places to start to prevent browsing boredom.