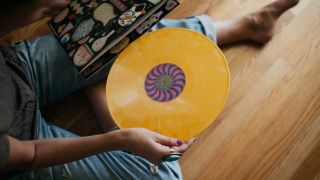 As if waking up in a post-apocalyptic world, vinyl’s revived form remains pretty well unchanged even though its surroundings are startlingly unfamiliar.

A music subscription service was once essentially a means of acquiring new records without rooting around the shops, but the ubiquity of music and easy access to information on the internet means mailing out 7in singles of the top 10 isn’t really a steady business model any more.

In all honesty, we were surprised by how many credible vinyl subscription services are out there. But they all share one aspect, whether it be mixing LPs with food or wine, pressing exclusive records or playing the role of record store manager-cum-sonic-guru: these are all services you can’t replicate simply by clicking through “related artists” on Spotify.

As well as subscribing to one of the services below, it's worth checking whether your local record shop is still selling online to support them during this time.

For those who covet a diverse collection

What you get: One LP and one 7in single a month.

“When we were young, record stores were magical places you could spend entire afternoons just browsing,” say Josh and Luke, Wax & Stamp’s two-man team, on their website. They are gratefully aware of the blessings of the internet, but miss the serendipity of a storeowner’s suggestion. So they created this subscription service, where each month they select one record and invite a guest to pick the other.

So far, guests have included snooker legend and DJ Steve Davis and comedian Josie Long as well as various DJs and label managers, and genres covered have been as varied as post-dubstep and Spanish garage rock.

For those who love discovering underground indie and alternative

What you get: Five exclusive 7ins.

“In 2015, Craig Evans was sat in his bedroom listening to Fleetwood Mac on vinyl, frustrated that music had become disposable and great new bands were being lost in the noise of the Internet,” reads Flying Vinyl’s website. If that makes it sound like a postal grumbling service designed to convince you music died in the 90s, don’t be fooled: your box is curated of the finest new indie, alternative and rock tracks discovered by Flying Vinyl, then exclusively pressed with full A/B sides and custom-designed artwork.

You also get an info booklet on the featured artists, giving background on any you’ve never heard of, and there's sometimes an extra treat thrown in – past boxes have included stickers, Polaroids and exclusive prints.

For those with a well-stocked spirits cupboard

What you get: One LP, an original art print and a custom cocktail recipe.

While relatively eclectic, the Records of the Month plucked by the comparatively well-known Vinyl Me, Please are more likely to be ones of which you’ve already heard: Beck’s Odelay and Hot Chip’s In Our Heads are two previously chosen LPs.

That ups the likelihood you’ll already have what you’re sent among your existing collection, but the twist here is these LPs are special editions – the company works closely with the label and artist to create an exclusive 12in with features like coloured vinyl, custom lyric books, exclusive artwork or artist notes. If that doesn’t appeal, however, or you don’t like a particular choice, committing to a 3- or 12-month subscription offers the freedom of swapping one in three of the records you receive (as well as driving down the cumulative cost). After that, a victory sip from the cocktail you’ve just made.

What you get: A classic album with specially commissioned 12x12in art piece, a bottle of wine and Stylus’s own magazine.

This is really one for those beginning a collection they want to include all the albums BBC Four have probably made a documentary about. We’re talking Rumours by Fleetwood Mac and Prince’s Purple Rain, records the majority of people who want them already have.

Selected by a musician and food writer named Russ and his wife, the rest of your box’s contents make sense: a bottle of wine chosen by award-winning merchant Great Western Wine, and a magazine including interviews with musicians and winemakers (as well as tasting- and listening notes). Though some may find this decidedly bijou venture rather sickly, hopefully the same can’t be said for the booze.

For those who just want to dance

What you get: Between 20 and 50 credits per month, which can be spent on dance music vinyl in the Casa Vinyl store.

Casa Vinyl's model is slightly different to the rest of the services on this list, in that your monthly payment affords you credits to be used in the online store. Most records cost 10 credits, though there are some that will set you back 15, so your basic 20-credit package is likely to get you two items most months.

If you don't know quite what you're looking for – the catalogue is broad, spanning genres from UK garage and Italo-disco to jungle and tribal house – the company also offers two, three and five-record surprise bundles, where your vinyl will be handpicked depending on which sections you've been browsing most.

What you get: A 10-track compilation LP of handpicked new bands.

If you’re after new musical recommendations, but a little tentative about putting all your trust into one picked-out artist, Vinyl Moon swerves the risk by putting together a rather eclectic mix tape, pressing it to coloured vinyl and commissioning a visual artist to design the cover – so you end up with something entirely individual.

As with most of these discovery-based services, you also get relevant literature to tell you about the bands you’re listening to, as well as lyric sheets and individual artwork for each track. A set of postcards to spread the word about the acts you like is another pleasant flourish.

For those who enjoy dancing round a bubbling pot

What you get: One 7in record, three seasonal recipes, a couple of premium ingredients and tasting notes.

Yes, this is another poster-couple-led subscription servicing your taste buds as well as your eardrums, but it ain’t quite as twee as the last one – Turntable Kitchen is to Stylus what Sufjan Stevens is to Ed Sheeran. You’re getting a single rather than an LP, but these are specially pressed and released by artists you’re not going to find on the shelves of your local supermarket.

If you’re not a keen cook – and why ought you be? They’ve built massive factories where professionals can do it for you properly – Turntable Kitchen also offers a coffee and vinyl subscription.

For those who just can’t get enough Jack White

What you get: One 12in, one 7in and a bonus item every three months.

Set up in 2009, originally as a means for Jack White to release special or unreleased projects from The White Stripes, The Raconteurs and other Third Man-affiliated acts, Vault has become a treasure trove for fans and collectors of White’s considerable output. Though your vinyl only comes quarterly, subscriptions include exclusive access to a host of online bonuses (such as ticket pre-sales and live streaming of certain Third Man events) and a healthy discount on subscription to TIDAL’s top streaming tier.

Even if you don’t like White’s work, a Vault subscription could still be a wise investment. An exclusive mono 12-inch of The White Stripes’ final studio release Icky Thump was included in the first-ever Vault box, for example, and copies have gone on Discogs for close to a grand.

What you get: Three records tailored to your tastes.

While it may be shrewd to keep a bucket nearby while navigating VNYL’s website – a gratuitous use of hashtags and the words ‘vibe’ and ‘crib’, presented in a garish pink and white colour scheme, make it feel a bit like it was designed by an excitable music teacher trying desperately to get their students to buy records again – the general concept is rather astute.

While most other services ‘recommend’ records based on its tastes, VNYL appoints each subscriber a rep who’ll pick out music especially for them. Once signed up, you can connect to your Spotify and Discogs accounts – the latter will help make sure you don’t get posted anything you already own, as there’re no returns or swapsies. Each month pick a ‘vibe’ such as #dinnerparty or #flowerpower (yes, they’re all hashtags) and they’ll do all the rest.

For those who just haven’t the time for crate-digging

What you get: Three second-hand LPs every month.

Not everybody enjoys hours spent rummaging in record shops and taking a chance on an eye-catching cover, so Retro Store offers to do all that for you. You can let them know the kind of music you’re into and they’ll try to match your tastes, or allow them full license to expand your sonic horizons.

The company doesn’t deal solely in vinyl – it offers similar services for cassettes, games and comics. Living in the past rarely seems so appealing.