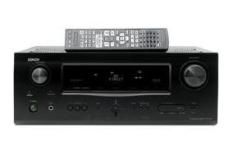 This Denon is a solid performer at a decent price, but it can’t be considered a class-leading proposition any more

Denon's AVR-2310 bossed this price level in 2009. In 2010 all eyes are on its replacement, the '2311. This new model got off to a great start with a five-star First Test, but how does it stand up against its peers and rather nifty rivals?

Features and specs are fine for the cash – after all, the Denon is a remarkably cheap amp.

Packed with connectivity
Six 3D compatible HDMI inputs shouldn't be sniffed at, and nor should the inclusion of an ARC-enabled HDMI output. The pull of an iPod/iPhone compatible USB input shouldn't be underestimated either, while Dolby Pro Logic IIz gives you the option of adding front height speakers instead of surround-back channels.

Other niceties, such as video upscaling to the tune of 1080p, eight-channel pre-outs and a bevvy of analogue inputs are par for the course at this price.

The only things missing when compared to some rivals are an extra HDMI output, (which isn't the end of the world), and the presence of any networking or streaming functionality.

Build quality is perfectly fine. It's a shame that the remote control's design has taken a backwards step, though; last season's model boasted a select few buttons moulded in different shapes and sizes depending on their function.

Granted, some of the buttons on the '2311's glow in the dark, but it still looks rather dated and button-heavy.Audyssey's MultEQ system handles the automatic speaker calibration.

Spot-on speaker distances
Our review sample got the speaker distances spot-on, but for some reason chose to set our speaker sizes to ‘small' instead of ‘large.' It's always worth going through the settings manually to check for obvious errors.

Spin an action-packed Blu-ray such as Transformers: Revenge of the Fallen, and the amp is quick to impress with a dynamic, attacking sound.

The fizzes and bangs of the robots' high-tech weaponry hit you with vigour. Steering and positioning of effects between channels is accurate and engaging, although rival machines do this with greater finesse and are even more convincing in their dispersal.

Switch from surround sound to stereo performance and the amp delivers an enthusiastic, lively and enjoyable sound that displays a fine sense of solidity and timing.

New rivals push it hard
Put the Denon's picture processing to the test and the result is a perfectly watchable image, but one that doesn't quite have the same image sharpness and clarity that class-leading amps can display – Robin Hood looks a little soft (not that we'd tell Russell Crowe that to his face).

It seems a shame that only a couple of months after awarding the Denon a five-star rating we need to drop a point.

The amp doesn't suffer from any serious faults, it simply suffers at the hands of some amazing new models.