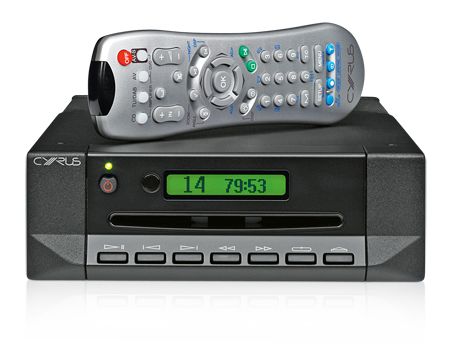 Cyrus introduced its extremely well-received CD6 SE and CD8 SE disc-spinners back in 2008. One of their key features was a new slot-loading CD transport mechanism with in-house software that controlled everything from how the disc loads to the way the laser reads the information on the disc.

This Cyrus CD 8 SE2 version brings us updates to the software, which claims to allow the transport to read data more accurately off your discs while at the same time being less fussy about the type of CD being loaded.

This is fairly important, as the previous version was occasionally a touch temperamental when it came to certain CD-Rs. It’s not a huge secret that we are already big fans of the CD 8 SE, but is it business as usual with this newly updated version?

In a word, yes. The look of the unit hasn’t changed, so you’re still getting the narrow chassis which is trademark Cyrus. The display is the same: it’s not the largest, but thanks to the use of strong-contrast black on green, it’s easy to read.

There’s room on the remote control for buttons to breathe and although it feels relatively cheap, it’s nice to use and we’ve seen much worse at far higher prices.

This player boasts all the organisation, musicality and punch that we’ve come to know and rave about with Cyrus. It’s as enthusiastic firing out the Red Hot Chili Peppers as it is getting to grips with the subtleties and intricacies of Beethoven.

The player doesn’t beat around the musical bush and gets to the emotional heart of the music in earnest – it’s as insightful as the very best at this price.

Low frequencies are beautifully taut and agile, the nimble nature of their delivery giving added impetus to the music. In fact there’s very little room for criticism.

And this is a Cyrus component, so of course there’s an upgrade path already carved out for it. For an injection of even greater dynamics and thrust, you can connect the company’s £500 PSX-R outboard power supply, which plugs into the dedicated input on the rear of the machine.

Adding the external power supply to the unit injects a sizeable extra dose of bass weight, authority and finesse. Low-level detail is even easier to hear and the player's delivery becomes even more refined and natural – which is saying something.

Cyrus also produces its own dedicated rack, interconnects and, of course, matching stereo amplifiers, if you’re keen on the idea of a one-make system. With or without these optional extras, though, you’re hardly going to be disappointed with what the SE2 can do.

If we were lucky enough to have this kind of budget, we wouldn’t be thinking twice about getting down to our nearest dealer for a listen.