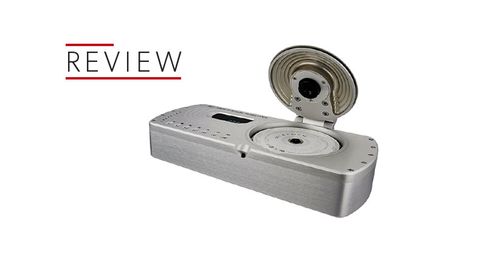 The finest CD transport we’ve heard. Partner with the DAVE and we doubt you can do better regardless of price

Want to know the best CD player we’ve heard? The answer is depressingly expensive. It’s Chord’s Blu Mk II transport combined with its range topping digital-to-analogue converter, the DAVE. Quality costs - and in this case the price is a hefty £16,000 for the pair.

But regardless of price, we haven’t heard a more insightful or transparent CD playing alternative.

We already know the DAVE DAC is brilliant. We reviewed it almost two years ago and, in our opinion, it remains the finest number cruncher around. The Blu MkII transport doesn’t have to be partnered with it though - Chord’s Hugo 2 (£1800) will work well too.

While the transport is capable of working with all DACs, you really need one that will accept sampling rates of 768kHz to make full use of it – and there aren’t many alternatives to the Chord designs in this respect.

Why 768kHz when we’re talking about a CD transport? While it’s true that CD’s sampling rate is fixed at 44.1kHz, Chord has built a high-powered up-scaler capable of lots of clever processing to try and extract CD’s 16 bits of data as accurately as possible.

When playing CDs, the Blu will scale to 705.6kHz - but feed in a 48kHz signal from an external source and it hits the 768kHz limit.

The extreme scaling and accompanying processing is all about reproducing the information packed into the leading edge of notes and transients properly, rather than the extended bandwidth those higher sampling rates also give.

When we first heard this we were sceptical. Upscaling in CDs players is nothing new, and in most cases when given the option of 'Scale' or 'Not' we almost always choose 'Not' after critical listening.

Upscaling may improve refinement and a sense of delicacy, but it can also spoils rhythmic drive and dynamic expression on most of the products we’ve tried.

Let’s be clear: that’s not the case here.

There’s quite a lot more going on here than in your usual CD transport. Chord has built its DACs on an unusual design using field programmable gate arrays (FPGA) loaded with proprietary software to do all conversions and processing duties rather than the standard off-the-shelf chips most rivals use.

The scaling and processing in the Blu transport are done with the latest and most powerful FPGAs the company could get its hands on, the Xilinx XC7A200T. This chip draws so much power (10 amps) and generates so much heat it couldn’t simply be added to the DAVE DAC.

The Blu has both BNC coax and USB inputs, so sources other than the built-in disc drive also benefit from the scaling.

There are multiple outputs - twin BNCs used in tandem to transmit the higher sampling rates, and a single BNC if you’re using a DAC not capable of accepting such extremes. In this case your data feed is limited to 384kHz.

The Blu has small toggle switches on its rear panel to govern the degree of scaling involved – we end up leaving this on maximum – and another to vary the amount of dither (random low level digital noise) added to the signal.

Why would you want to add noise to the data stream? Using dither is a well-known technique in digital products to help improve resolution at very low signal levels. Here it only works for 16-bit signals, letting 24-bit streams pass unaffected.

With CD, we prefer the sound with the added dither as there’s a slightly greater sense of solidity and overall subtlety. You’ll need a truly transparent system to hear it though.

Along with the DAVE DAC we use our usual reference set-up of Gamut D3i/D200i pre/power and our trusty ATC SCM50 speakers.

This transport isn’t the slickest operator around. That CD lid is strongly sprung and tends to snap into place without grace - simply loading or removing a CD takes a specific technique.

Get it wrong and the lack of room around the disc leaves little space for fingers and you end up dropping the disc on the central spindle in hope more than expectation.

On the positive side, this Chord is a superbly made solid chunk of aluminium. It’s an expensive item, but has the luxury feel we would expect.

Aside from the issues we’ve mentioned – we learnt our way around them over time – this transport is as easy to use as any other.

We start our listening tests comparing the standard 44.1kHz output to the scaled equivalent. It doesn’t take long to decide.

We play Nick Cave and the Bad Seeds’ The Boatman’s Call and the scaled presentation is so much more expressive and fluid it’s hard to believe we’re listening to the same product. By comparison the standard 44.1kHz output sounds small, cluttered and mechanical.

Once we’re on the scaled output - and checking the DAVE is showing 705.6kHz - we get down to some serious listening. Into My Arms is a charming track with a lovely flow and a full dose of Cave’s distinctive vocals.

The Chord takes it all in stride, delivering his voice with a wonderful combination of weight, warmth and, when required, power.

There’s just so much texture and nuance on offer we feel we’re hearing the song in a new light. The accompanying piano is convincingly rendered, brimming with authority and precision – the leading edges of notes are captured brilliantly.

We move onto Hans Zimmer’s Interstellar OST, and the Chord sounds right at home with the dense production. We get a huge sense of scale and an expansive soundstage populated with sounds and instruments that are firmly planted in position.

We love the composure on show and the layer upon layer of fine detail the Chord reveals. It’s fair to say we’ve never heard this album laid bare in this manner.

But the Chord sound isn’t just about information. There’s class-leading insight here, but that goes hand-in-hand with a cohesive and musical approach that puts the music and its emotional impact first.

We try out the Blu’s digital inputs and are happy to report similar high standards are achieved here too.

Whether we use our resident MacBook Pro (USB) or the digital out from our reference Naim NDS/555PS streamer (BNC), the Chord’s innate high level of insight and musical organisation come to the fore.

It’s a wonderfully dynamic sound that pays as much attention to floor-shaking crescendos as it does the nuances in Bruce Springsteen’s emotionally charged vocals on Terry’s Song or Nina Simone’s joy in I Ain’t Got No, I Got Life.

Those who think all CD transports sound the same are in for a shock. The Chord Blu MkII delivers the most informative and enjoyable sound we’ve heard from the CD format.

While it’s expensive, there are far pricier alternatives that don’t get close. We’re sorely tempted.

See all our Chord reviews