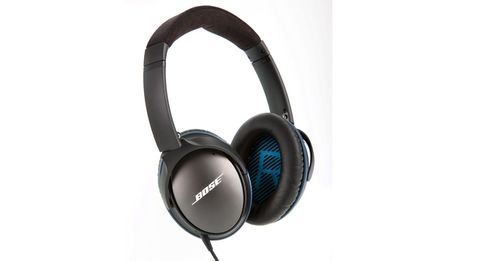 Award-winners back in 2014, these are still good noise-cancelling headphones

For years, the Bose QuietComfort 15s were our go-to noise-cancelling headphones, winning our Award for the category four times in a row. For a while we wondered if anything could ever beat them. Then came their successor.

The QuietComfort 25s, launched back in 2014, are an improvement in every way. Whether it's design, aesthetics, performance or noise cancellation, Bose has built on every aspect that we loved in the Bose QC15 headphones and made it even better.

Noise cancellation is a good place to start and we’re pleased to say it works really well. Astonishingly well, actually. The old QC15s were already great in this department, at times giving the impression of actively pushing silence into your head, yet the QC25s take it further.

Office hubbub is dramatically reduced. The hum of air conditioning is eradicated. Voices aren’t erased entirely, but we’ll challenge anyone to pick out any part of a conversation while music is playing at an enjoyable level.

As with every pair of noise-cancelling headphones we’ve tried, the effect is more powerful when it comes to deeper, consistent sounds: so no longer will you have to crank up the sound (and risk tinnitus) on a flight, for example.

When used as they should be, the QC25s offer a well-balanced presentation, without ever leaning towards any part of the frequency range.

This means the low-end doesn't have the weight of the Beats Studio headphones or PSB M4U 2s, but what it lacks in muscle it makes up for in agility and precision.

It integrates well with the midrange, which is smooth and open with plenty of detail and clarity. We love the insight on show here too – pianos have depth and texture to every note, while percussion sounds believable and never unduly harsh.

Despite the balanced presentation, the QC25s strongest point has to be their sparkling, open treble, which soars all the way up to highest notes without a hint of hardening at any volume.

With such even handling, the QC25s are at home with any musical genre. They have the insight and maturity to handle subtle classical tracks, but can produce the drive and attack required to take on faster pace rhythms with confidence.

There's a precision to the way notes start and stop too, and while the QC25s steer just clear of making sound analytical, it does make them seem a little more restrained when compared to something more up-front and fun, such as the PSB M4U 2s. Which balance works for you will come down to taste.

But good noise cancellation and good sound – it’s a pleasant combination, and good packaging always helps. Ergonomics were never an issue, but the aesthetics have improved.

There are fewer seams, for starters, on our black sample (we’re not as keen on the white version, whose brown-beige parts remind us of Band-Aids).

There is still a lot of plastic here, but Bose has mixed in a few materials to give a more luxurious feel. The dome of the earcups are metal. The headband features fabric: a woven material on the outside and pseudo-suede on the inside.

Construction feels very solid, so you can commute with confidence. These headphones sit closer to the head than their predecessors, but they’re just as comfortable.

The clamp force is perfectly judged; they grip but never squeeze. The protein (synthetic) leather earpads are gentle on the face, the memory foam is irresistibly squishy, and perforations on the inside ensure heat won’t build up.

As with the QC15s, one of the earcups has a hidden flap, which opens to take a single AAA battery. Quoted battery life for a standard (alkaline) battery is 35 hours.

And when that runs out? Well, the QC15s couldn’t be used without power but, thankfully, the QC25s can run passively. You don’t need power to listen if you’re happy to make do without the noise cancellation and the built-in amp.

The sound is fine, but quite obviously quieter and less insightful than when activated.

So what do you do if something ain't broke. Well, if you're Bose, you go ahead and tinker with it anyway, producing a new product that's better in every way.

These headphones remain good value, though, especially now that they're available at a lower price.