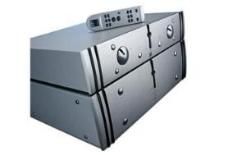 ATC may be best known as a speaker company, but this preamp (used in conjunction with its matching P1 power amp) proves it builds great amps too

ATC's reputation is built on its excellent range of speakers.

What many people may not be aware of is the company also has years of experience making amplifiers. We're not just talking about the power amplifier modules used in its extensive range of active models, either.

We've already reviewed and liked the latest version of its SIA2-150 integrated amplifier, and now it's the turn of the manufacturer's new CA-2/P1 pre/power to go under the microscope.

Oddly, there isn't much difference when it comes to price. The pre/power adds a mere £250 over the integrated – if sound quality is your main priority then it's money well spent.

Once warmed-up (running-in doesn't seem to be an issue; our review pairing's sound changed little over the test period), these amplifiers are about as even-handed, sonically speaking, as amplifiers get.

Unobtrusive sonic signature
As a result it's hard, at first, to get a handle on their character, so unobtrusive is their sonic signature. At this price tonal neutrality should be a given, and it is here: this pairing sounds impressively faithful to whatever instrument or voice it's asked to reproduce.

But there's more to this combination's sonics than just convincing tonality. Control – both dynamic and rhythmic – is on the menu, too, and while this particular quality may not appear to be as glamorous as dynamics or detail (both of which are also in admirable evidence) it's just as important when it comes to music replay.

Controlled performance
These ATCs sound firmly in control, no matter how complex or demanding the material is.

Listen to the kind of music that makes most amps crumble – we're thinking about The Battle from the Gladiator soundtrack, or Massive Attack's Angel – and this pre/power will take it in its stride, delivering all the drama required without sounding like it's working hard.

The same remains true at high volume levels, too.

We'd like to go on about the pleasing stereo imaging – it's focused and stable, even when the music gets busy – and the power amplifier's way of taking charge of speakers in a manner well beyond what we'd expect from something rated at 150 Watts per channel, but these things tend to go unnoticed most of the time.

That's as it should be. This is a combination that just gets on with the task of delivering the music without ever intruding.

Honesty shines through
Make no mistake, at this kind of price point there are far flashier-sounding alternatives available. There are talented rivals that sound warm and inviting and others that are upbeat and exciting, and if their character suits we have no doubt they can form part of a great system.

In direct comparison at a quick dealer demo we can see many people going for such colourful alternatives over the ATCs. But, over the long term we think the CA-2/P1's greater honesty wins out.

If you want to hear the recording unvarnished, there are few better ways of doing it at this price level.

Moving away from sound, we're happy to report build quality is good. Everything feels solid and well put together: as with the audio performance there's nothing particularly flashy on offer here, just good, solid engineering.

Dual mono design
Take a look inside the preamp and you'll find discrete components in the signal path – rather than integrated circuits – and a great deal of care has been taken over the power supply arrangement.

The power amplifier is a dual mono design, with a dedicated mains transformer for each channel. The design is entirely consistent with the preamp in attempting to minimise noise while delivering a wide band signal.

Complaints? Only a couple. We like the simple remote handset, but it lacks the quality feel of the amplifiers themselves. Also, while it's always nice to have a headphone output, it's mounted on the rear panel, which to us makes no sense at all.

So, to sum up: if you're looking for a fuss-free, honest-sounding pre/power, take a listen to this pairing. Few, if any, of the CA-2/P1's rivals share such a formidable spread of talents.