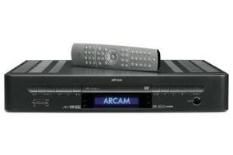 Matches one-box simplicity with superb-quality sound and vision: it’s sure to do well

It's easy to see why people buy home-cinema-in-a-box systems.

It's not just a question of money: it's also that opting to buy a stylish, small system is far less hassle – and from an aesthetic perspective, it helps ensure your living room's feng shui is only marginally disturbed, rather than irrevocably shattered.

Sadly, opting for the easy life inherently involves compromises on sound and vision quality: it's up to you how much of the latter you're prepared to trade-off in favour of the former.

However, Naim's £3000 n-Vi system proved that style systems could still deliver the performance goods, so long as they were carefully designed – and that's precisely what Arcam hopes its Solo Movie 5.1 system will demonstrate, too.

At first glance, the Solo Movie 5.1 resembles Arcam's stereo-only Solo – a double-Award winning favourite of ours – but under-neath it's a sight more complex.

Beneath the compact (8cm high, 35cm deep) chassis lurk five 50w channels of amplification, a DVD drive capable of playing DVD-Video, DVD-Audio and SACD discs, and a useful array of inputs and outputs to support most needs. As with the Solo, you also get DAB/FM radio and iPod support.

Strong picture quality
In action, DVD picture quality is the Solo's strongest suit: here, the Arcam is the equal of many £600-£800 standalone DVD decks, both in terms of specification and quality.

You get an HDMI output with upscaling to 720p or 1080i, and using this output delivers images full of depth, colour and excitement: it looks particularly dramatic with our pristine DVD transfer of Bobby, capturing all those 1960s hues to a tee.

Sonically, the Arcam's slightly soft balance won't trouble the best £1000 receivers, but it can easily live with a decent budget surround receiver, such as the £250 Denon AVR-1507.

Surround steering is composed and convincing, clarity admirable and there's enough heft to deal with the fairly modest speaker packages most likely to be used with a system of this type.

Plays music well too, with the Solo 5.1
And when it comes to stereo performance, the Solo Movie is typical of all Arcam AV kit: warm-sounding and far more musical than many home cinema rivals. However, it can't quite match the punch and pace of its two-channel Solo sibling – but then that's no use at playing DVDs now, is it?

Given that you're getting this level of picture and sound quality – in a box no larger than the existing Solo – it should be pretty clear that the new Movie 5.1 is something to get excited about.

We can see it doing rather well…