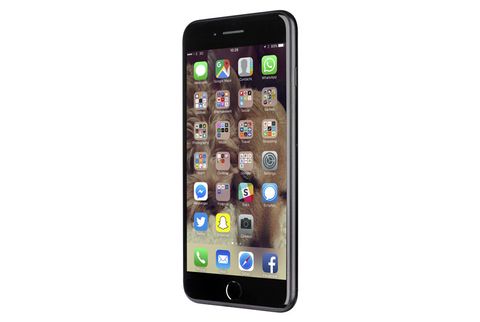 The Plus range has finally grown into its own – if you can handle the size, the 7 Plus is the iPhone to have

When Apple announced the first larger iPhone in 2014 with the iPhone 6 Plus, there were few compelling reasons to opt for it over its regular-sized sibling.

It had a bigger screen, but with a larger price tag to match, we weren’t convinced that the upgrade was worth it.

With the iPhone 7 Plus there seems to have been a definite shift to changing that. In fact, it even feels like Apple has made this the iPhone to buy this time round, with some clear improvements that you won’t find on the smaller handset.

But it’s also the most expensive iPhone we’ve seen in the UK. Do the new improvements make the premium price tag worth it?

The iPhone 7 Plus features Apple’s own A10 Fusion chip with 3GB RAM (up from 2GB in the iPhone 7), which claims to be 40 per cent faster than the A9 in the iPhone 6S Plus.

It gets the Fusion moniker due to its combination of two lower power cores alongside two higher power ones. Not only does this keep the 7 Plus light on its feet – it never kept us waiting during testing – but also helps to conserve energy for a better battery life.

It really helps. Apple claims the 7 Plus should give you a whole hour more juice than the 6 Plus, but we’d argue you could even squeeze out a little more still.

As power users, we often find ourselves plugging in our iPhone 7 by mid-afternoon for a bit of a boost, but the battery life on the 7 Plus is outstanding.

It’s enough to make it through a whole day with no worries – something we rarely say about an Apple handset. For many, this alone will make the iPhone 7 Plus worth the upgrade.

MORE: Apple Lightning and the iPhone 7 - what you need to know

Apple has reused the same basic design for its handsets for the third year running.

Usually due a refresh after an “S” launch, the iPhone 7 Plus instead looks almost identical to the 6 Plus and 6S Plus before it, save for a few very small tweaks, such as the larger camera bulge on the back (more on that later) and the moving of the antenna lines to the very top and bottom of the handset.

We wouldn’t usually mind this lack of evolution, but the iPhone 7 Plus is easily one of the larger big-screen phones, with a screen that actually isn’t that big (5.5in) when you consider the 5.7in LG G6 and the 5.8in Samsung Galaxy S8.

Those competitors have flexed their muscles in the aspect ratio department to get a bigger screen into a smaller body, but the fact remains that the iPhone 7 Plus doesn’t do a good job of making a big screen phone work for normal-sized hands.

It’s just a bit unwieldy, and its slim aluminium body with curved edges isn’t the easiest to grip when you’re stretching your thumb to the other side of the screen. Two-handed texting will be a must for most.

Despite its largely identical looks, there are still a few new design tweaks matching those on the iPhone 7.

These include the new Taptic home button, a pressure-sensitive touchpad that vibrates click-like feedback when pressed, to replace the physical button. Apple says that it’s less likely to fall victim to mechanical fault, making the handset more reliable over time.

The pad still doubles up as your TouchID fingerprint scanner for security and Apple Pay, and works just as quickly and smoothly as the previous physical button. You can even adjust the level of haptic feedback you want too, with a choice between three levels of intensity.

The iPhone 7 Plus also makes the divisive move of replacing the headphone jack with Apple’s Lightning port, meaning you’ll either need Lightning-compatible headphones (you get Apple’s own Lightning EarPods in the box), a pair of wireless Bluetooth headphones or attach the included 3.5mm adapter onto your favourite cans instead.

Elsewhere, the iPhone 7 Plus gets IP67-rated waterproofing for the first time, and a couple of new colourways. They include the new matte black and Jet Black options to replace the previous Space Grey, alongside silver, gold and rose gold. The company has just announced a red option too.

MORE: These are all the Lightning headphones on the market

When it comes to taking photos, the iPhone 7 Plus has a few tricks up its sleeve compared with its smaller stablemate.

That camera bulge on the back is down to the Plus packing two rear cameras instead of one – one for regular snaps with the 12MP f/1.8 wide angle sensor, and one that’s a 12MP f/2.8 telephoto, with 2x optical zoom.

Why does this matter? Optical zoom allows you to close in on objects without the loss of detail you’ll get with the digital pinch-to-zoom, for clearer, closer snaps.

It works well too. Because of its narrower aperture, it’s not the best choice for using in low light (in fact Apple’s software will choose to digitally zoom instead if it thinks the light is too low), but it does a good job of retaining clarity, sharpness and detail in zoomed daylight snaps.

We still reach for the main camera for the most part though, and optical image stabilisation once again gives the 7 Plus’s camera the edge over the regular 7, particularly in lower light shots.

That’s because the aperture is wider than ever here, letting in much more light than the f/2.2 lenses on the 6 Plus and 6S Plus. It shows.

Low light snaps are sharper and less noisy than we’ve seen on its predecessors, meaning we feel the need to reach for the new Quad-LED TrueTone flash less often.

There is one final party trick from the 7 Plus’s camera though, and that’s the portrait mode, which Apple says is still in beta.

With this, you can take a “depth effect” shot, using both rear cameras to create a simulated depth of field effect with an artsy bokeh blurred background.

Given strong outlines, it works pretty well, but if it struggles to find the perimeter of the in-focus object, you might see a slight halo effect.

At its best though, it can create some really striking photos that look pretty professional indeed. At the very least, it’s a nice feature to play around with.

The display on the iPhone 7 Plus is the familiar 5.5in 1080p 401ppi Retina display that we’ve seen on the Plus range since its launch – but dive a little deeper and you’ll see Apple has made some key changes to this screen.

While it looks like the same screen, it’s actually 25 per cent brighter than the one on the 6S Plus, and now offers support for the DCI-P3 standard – a wider colour gamut than the more standard sRGB found on older iPhones and many competitors.

This means richer, more accurate colours. Apple handsets have long offered a good balance with their colour palette anyway, but the 7 Plus looks subtler and more natural still, without losing any of the vibrancy where it counts.

Outlines are crisp and detail levels look good – you might find a fraction more if you look hard on some 2K+ displays such as LG’s G6, but it’s not something that’s glaringly obvious. Considering the difference in resolution, that says a lot for the 7 Plus’s processing.

There’s also a lot to be said for how unreflective the 7 Plus’s screen is, making it easy to read in bright sunlight, and leaving the super-shiny LG G6 for dust.

The 7 Plus will even find something extra in its brightness levels for brighter environments when left on auto mode – boosting the screen from around 600 nits to 700 nits. You won’t be able to get this manually in order to save your battery, but it’s a nice touch for when it’s really needed.

Contrast is strong, with whites really bright compared to the slightly greyer performance on the LG G6. Blacks are arguably deeper on LG’s handset, helping highlights to punch through darker scenes with a bit more power, but Apple’s handset is subtler and more detailed in the shadows in reply.

Despite its spec differences, the 7 Plus easily holds its own against one of 2017’s biggest flagship phones, and even occasionally tops it. If one of your reasons for buying the 7 Plus is its screen, you won’t be disappointed.

Sound is another area that impresses, despite the competition having better specs. Support for high-resolution music would be nice, but it’s hard to be mad when it sounds as good as it does.

Timing has always been a feather in Apple’s cap, and that’s still the case here – the 7 Plus is fast on its feet when it needs to be while retaining the fluidity to tackle softer, more melodic tracks with equal ability.

It’s confident in its talents too – rich in the bass without overdoing it and expressive throughout the midrange, with the dynamic agility to follow the rise and fall of a track with precision.

Don’t worry about the treble, the 7 Plus has it perfectly judged, with a tonal balance across the board that is absolutely spot on.

This all comes together for a presentation that just sounds right. It’s a solid sound that doesn’t overlook the subtleties of a track, while tying together instruments and vocals in a way that really works.

It’s a slightly bigger and bolder sound than the already excellent iPhone 7 too, making this the best sounding iPhone yet.

So, is the iPhone 7 Plus the iPhone to buy right now? If you can deal with the size of the phone – not to mention the price tag – it certainly betters its smaller sibling in almost every area, including screen, sound, battery life and camera.

It doesn’t chase the specs of its rival flagships, but instead chooses to hone what it has and make them even better than before. It’s a risky move in an industry of “what’s next”, but one you have to applaud when it produces results like this.

The Plus really feels like the full package, for perhaps the first time in its three-year history. We reckon we can sacrifice one-hand texting for that.